PV beats FHS for third time, this time in Tuesday's 5A quarterfinals in Albuquerque. 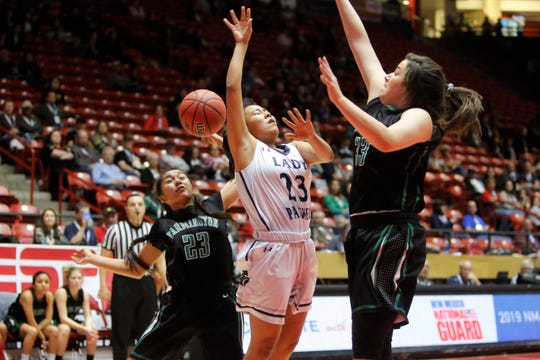 Farmington's Kiiyani Anitielu (23) comes up from behind and blocks a shot by during Piedra Vista's Hallie Blackie during Tuesday's 5A state quarterfinals game at Dreamstyle Arena in Albuquerque. (Photo: Matt Hollinshead/The Daily Times)

ALBUQUERQUE – Piedra Vista stayed the course in round four against crosstown rival Farmington, only this time the Lady Panthers' state championship hopes will go on following their 64-56 win in tonight's 5A quarterfinals at Dreamstyle Arena in Albuquerque.

"It was very exciting, especially when each team is shooting (well) and they're making it," PV forward Lanae Billy said. "The girls knew what we were supposed to do, so we came back and finished it."

Farmington got some quick post touches in the opening minutes, and soon garnered some momentum with a couple big fast-break layups.

"When we move the ball quick and swing the ball and get it in faster, they can't come double-team as quick. We got better looks," said Lady Scorps forward Jordan Vasquez.

PV responded by knocking down some corner 3s, and also swung the ball around the wing looking for quick shots.

Both sides kept on exchanging blows, fighting for every basket, every swipe at the ball.

FHS kept charging to the rim and getting to the foul line late, cutting PV's lead to 55-53 with 2:56 left in regulation.

However, PV (26-3) hung in there and got some key stops in the paint. PV also knocked down some key shots in transition to pull ahead at the end.

"It was great to see. We played like a veteran team at times, especially the last two minutes," said PV coach Joe Reed, whose squad beat FHS for the third time this year. "I think we kind of took our foot off the gas a little bit, which is uncharacteristic. We like to go after people. But we just stayed the course."

"If you don't take care of the basketball, of course you're going to lose games," Farmington coach Larenson Henderson said. "It's a sting right now. I think a lot of things went against us."

Billy had 26 points for PV, while Vasquez tallied a double-double with 18 points and 17 rebounds for FHS. FHS's Kiiyani Anitielu chipped in 17 points and six rebounds.