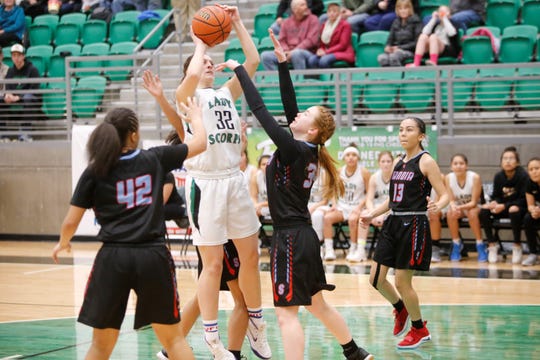 FARMINGTON – First-half struggles may be an unsettling sight at first for Farmington, but the Lady Scorpions can deal with it. That’s because they’re conserving energy amid tougher battles.

FHS enters the second half with a clearer frame of mind, playing smarter on both ends of the floor.

Farmington either pulls ahead in the third quarter or keeps grinding out key points and stops to take control in the final minutes.

That’s how FHS managed to take down the likes of Rio Rancho, Hope Christian, Miyamura and Sandia.

“Sometimes, we tend to play sloppy defense, reach in and get into foul trouble. It definitely takes pressure off us when we pull ahead like that,” forward Jordan Vasquez said.

FHS is cutting down on ill-timed fouls by the second half, and defenders are more aware of their surroundings.

Farmington is also being smarter and more decisive with its ball movement, constantly seeking out that ideal shot.

“I’ve noticed I’ve been holding the ball too much lately, so I want to get my teammates more involved just in case I’m not there. They’ll be ready,” point guard Kiiyani Anitielu said. “We take off in the second half.”

The first half has become Farmington’s platform to evaluate things and to study its adversaries.

Players are better able to take away something that went in foes’ favor in the first half, whether baskets on penetration or defensive stops from pressing up top.

Farmington coach Larenson Henderson also now insists that his players look at their foul totals in the locker room at halftime. That way, it makes players more cognizant of what they’re doing on the floor.

“We’re saving a lot of energy. We’re not gambling so much. We’re actually staying down. We’re putting more pressure on (opponents) by sitting back, (and) now they start second-guessing when they try to run things,” Henderson said.

The first half may give Henderson a headache, but the second-half efforts have proven to relieve that headache. 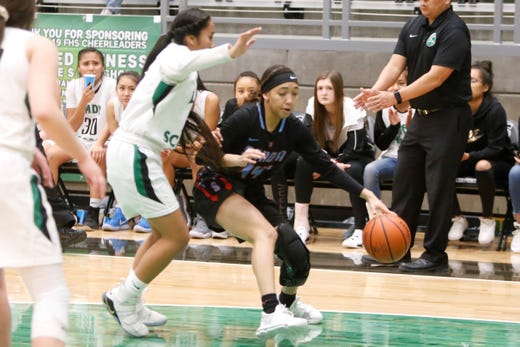 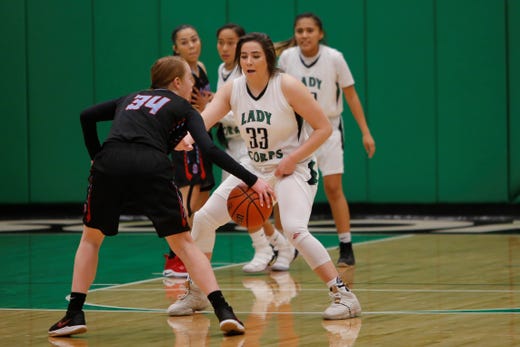 Farmington's Chloe Finch looks to get a defensive stop at the top of the key against Sandia's Autumn Gonzales during Friday's game at Scorpion Arena in Farmington. Matt Hollinshead/The Daily Times
Fullscreen 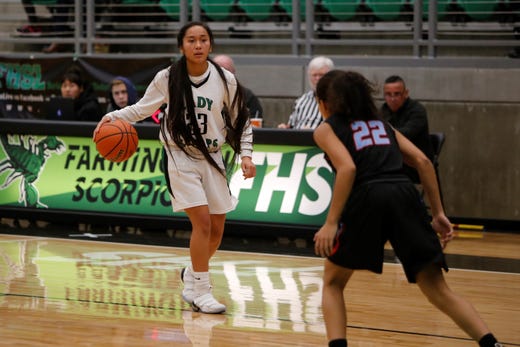