Navajo Prep and Newcomb could have strong seasons, while Farmington could shock the state under new coach 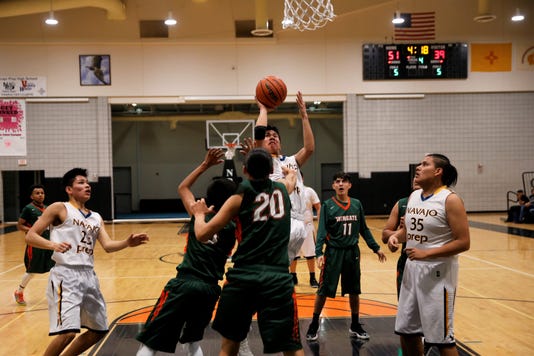 Navajo Prep's Thomas Montanez puts up a contested shot against Wingate during a district basketball game on Feb. 6 at the Eagles Nest in Farmington. Montanez will be among several key returners for Prep this season.(Photo: Matt Hollinshead/The Daily Times)Buy Photo

The Eagles return virtually all of their speed players to the floor for the next two seasons, including Lance Morris, Thomas Montanez and Treston Yazzie.

That will greatly benefit Prep, which can do damage driving to the basket.

And after moving down from Class 4A to 3A, the Eagles are primed to make a deep run.

Just as Farmington did when Collins played for the Scorpions back in the late 1990s, the team often will play fast front to back.

The one notable difference, however, is that Collins wants to press all year long on defense, as opposed to limiting man-to-man pressure once district play starts.

Collins also hopes to see his team score at least two or three uncontested layups any given night.

This season, and perhaps future seasons, could very well be a fast-paced, high-flying show at and away from Scorpion Arena.

The Skyhawks have won 18-plus games in three of their last four seasons. Newcomb graduated just two players (Joshua Moses and Nicholas Tsipai) from its 21-win campaign last year, so virtually the whole key group is intact.

The Skyhawks have another strong chance for a stellar year, especially with a slightly easier schedule on deck.