PV held a 28-27 lead at halftime, but was outscored 15-4 in the third quarter and could never recover from the deficit. 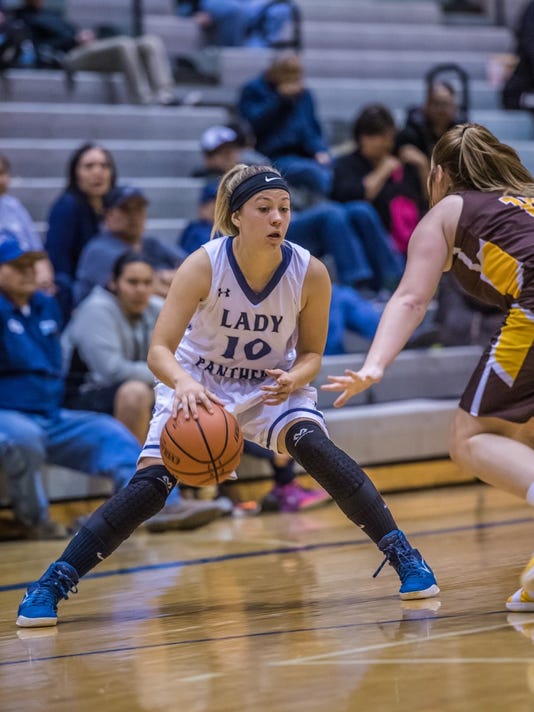 Piedra Vista's Hannah Sayyeau looks to attack Cibola's defense on Friday at the Jerry A. Conner Fieldhouse.(Photo: Jesse Hankins/Special to The Daily Times)

FARMINGTON — A rough third quarter doomed the Piedra Vista girls basketball team to a 57-48 loss to Cibola tonight at the Jerry A. Conner Fieldhouse.

The Lady Panthers held a 28-27 lead to start the third quarter, but were outscored 15-4 in the period and could never recover from the deficit.

PV started the game well. On offense, PV got production from up and down the lineup, and had six players find the scoring column in the first half.

Defensively, the Lady Panthers (11-11, 1-3 District 1-6A) implemented a 1-3-1 zone to limit Cibola's low-post presence that beat up the Lady Panthers when the two teams met in Albuquerque earlier this season. The zone was effective in the first half, but after intermission, PV struggled to rebound, giving the Lady Cougars (14-7, 3-2) too many second chances.

"It came down to rebounding tonight. I told the girls that the reason we lost this game was we gave them too many second-chance points," Reed said.

Piedra Vista's Elli Wright shoots against Cibola on Friday at the Jerry A. Conner Fieldhouse. (Photo: Jesse Hankins/Special to the Daily Times)

The Shiprock girls basketball team continued its dominance over Thoreau (9-12, 0-3 District 1-4A) with a 73-37 thrashing tonight at the Chieftain Pit in Shiprock.

In the previous eight meetings between the two programs, Shiprock won by an average of 36 points, right in line with tonight's game.

"I think we're really seeing each other on the floor well. The girls are moving with a lot of speed and reading the defense better," Shiprock coach Larenson Henderson said. "They're pushing the ball and hitting people when they're open. They're playing good ball."

The Lady Chieftains (18-5, 3-0) led 40-8 at halftime, and midway through the third quarter, Henderson pulled his starters to give the bench ample playing time.

In its third game in three days, the Northwest girls basketball team came away with a narrow victory when Naomi Begaye hit a free throw with no time left on the clock to push the Lady Falcons past Dove, Creek, Colo., (2-10) 38-37 tonight in Dove Creek.

Northwest coach Mike Christy said the game was close the whole way, and on the final possession, Begaye was fouled on her buzzer-beating 3-point attempt.

Sent to the line for three free throws, Begaye drained the first for the win. She led the Lady Falcons with 15 points.

The win snapped a four-game losing skid for the Lady Falcons (4-13) and was the best offensive outing for the team during the losing streak.

The Piedra Vista boys basketball team was in position to snag its first District 1-6A win of the season tonight, but a second half plagued by turnovers led to a 52-36 loss to Cibola in Albuquerque.

The troubles really started on the Panthers' final possession of the first half when a turnover led to a Cougar layup that sent the game to halftime with Cibola leading 22-18.

In the second half, PV collapsed under Cibola's pressure, committing turnover after turnover to allow the Cougars to pull away.

Manning said PV's defense in the first half was phenomenal, and the strong defense continued in the second half. There were just too many turnovers to overcome.

PV will have another tall task on Saturday, playing at defending 6A state champion Rio Rancho.

"If we don't have turnovers that lead to easy baskets, we'll be fine. It's going to come down to if we can make shots and handle the pressure," Manning said. "We have to play a pretty perfect game because (Rio Rancho) is the real deal. I know my guys are going to step up, and they'll be ready for the challenge."