David Juan was fouled after time expired in a 1-point game, and his two made free throws lifted Wingate past Shiprock.

SHIPROCK — The Shiprock boys basketball team had countless opportunities to put a surging Wingate squad down for the count in the fourth quarter tonight, but couldn't make good on any of them.

Ahead by 1 point inside the final 10 seconds of the game, the Chieftains missed three consecutive one-and-one free-throw tries. After the final miss, Chieftains guard Kieon Harvey was whistled for making contact with the fast-breaking David Juan of Wingate (9-13, 2-0 District 1-4A), who began to move his arms toward the basket from more than 30 feet away as the clock reached triple zeroes. The referee ruled that Juan was in the act of shooting and awarded him three free-throw attempts.

All Juan needed to do was make two of the three free throws, and that's just what he did, sinking his first two attempts to send Wingate home with a 51-50 win at the Chieftain Pit in Shiprock.

Bears fans traveled well, nearly filling up the visiting side of the bleachers. Shiprock coach Chester Atcitty said his team has responded unpredictably at crunch time, so he believes the noise level that both sides of the arena brought — coupled with the high-pressure situations down the stretch — made for a perfect storm. 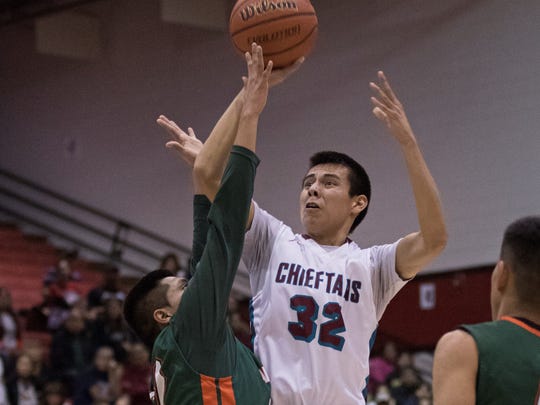 "I think it's nerves, I think it's pressure," Atcitty said. "Some things we try to get them to visualize in practice. We're still young, and I think they're starting to realize that they've got to take practice seriously. They've got to visualize themselves hearing this crowd, as loud as it can be."

Shiprock (8-13, 1-1) went into halftime with a 28-22 lead, but Atcitty said he knew Wingate was a second-half team. Though the Chiefs got the upper hand in the third quarter, they couldn't hold Manuelito Chee and the Bears down in the fourth.

Chee dropped 9 of his game-high 21 points in the fourth, using a series of post moves and a soft touch to help his team sprint out to a 10-1 run in the opening minutes of the fourth to tie the game at 46.

"My guys wanted to play in too tight. They've got to come out and at least get a hand in the passing lane on him," Atcitty said. "And there were moments where they fronted us, and we just reacted too late. And (Chee's) got pretty decent post moves. Attacks the hoop, spins."

“I think it's nerves, I think it's pressure. Some things we try to get them to visualize in practice. And we're still young, and I think they're starting to realize that they gotta take practice seriously. They gotta visualize themselves hearing this crowd, as loud as it is.”

The Chiefs did very well on the offensive glass all game long, and their prowess in that department appeared as if it would spearhead a narrow win. But with his team up 50-49, Lennard Hoskie was fouled with 10 seconds left and he missed a one-and-one. Then Henderson grabbed the board, got fouled and missed a one-and-one himself. Finally, Arvin Begay repeated the same process, before Juan stunned the Shiprock fans with his two made free throws after time had expired in regulation.

Kevin Begay had 14 points for Shiprock in the loss.

Atcitty coached with a heavy heart tonight after his mother, Roberta, died Wednesday morning. She was frequently in the stands for Shiprock games, Atcitty said.

"My mom's a big supporter and a big fan. Always here for the boys — and for me — so she'd want me here," Atcitty said. "That's what she would have wanted, for me to push the boys in the right direction."

Good guard play and a well-executed first half helped Navajo Prep get into the district win column tonight.

Freshmen Lance Morris and Thomas Montañez combined for 25 points as the Eagles exploited Thoreau in the guard match-up en route to a 66-50 win at the Eagles Nest in Farmington.

Prep (13-7, 1-1) had trouble maintaining its competitive fire after speeding out to a 21-point halftime advantage.

"It's always hard to play when you're ahead and you kind of know everything's taken care of," Eagles coach Rick Hoerner said. "We never got in a good rhythm in the second half. It looked like one of those where everyone's just hoping to get it over with kind of quickly."

The Eagles had three players in double figures. Tyler Pete was tops on the team in scoring with 15 points.

Prep is off until Tuesday, when it visits Wingate.