The Bobcats used a strong second quarter to get past Aztec at home.

Bobcats roar with a 17-2 second-quarter run

Aztec's Jacob Feil, left, knocks the ball out of the hands of Bloomfield's Ty Padilla on Saturday at Bobcat Gym in Bloomfield.(Photo: Curtis Ray Benally/Special to The Daily Times)

FARMINGTON — The Bloomfield and Aztec boys basketball teams have gone in opposite directions recently, and tonight's lopsided game at Bobcat Gym in Bloomfield stayed true to that trend.

Bloomfield won its seventh game in its last eight tries by beating Aztec behind a 17-2 second-quarter run. The Bobcats coasted from there, handing the Tigers their sixth straight loss by a final score of 65-37.

"We made an effort to get out on their shooters and make it tough on them from deep," Bloomfield coach Randy Crockett said. "Then we tried to take away their post game, which we weren't as successful at."

The game was competitive early in the second quarter at 17-16, but Bloomfield ran away from Aztec with a 17-2 run to make it 34-18 by halftime.

Crockett said the team didn't make too many adjustments from there and instead focused on taking care of the basketball.

"We just tried to do a better job of taking care of the ball and running the clock," Crockett said. "We didn't want it to get to be a turnover-fest like it was the last time in Roswell." 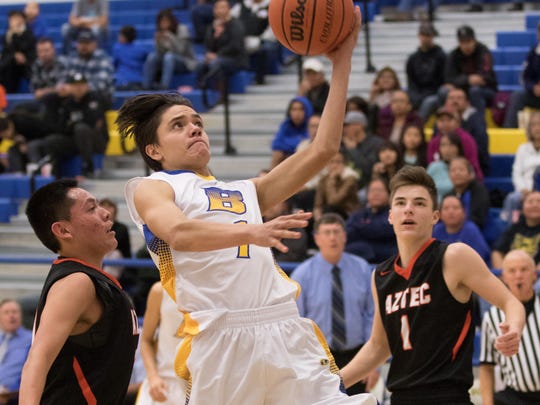 Ty Padilla led the way for Bloomfield with 15 points. The Bobcats also got 13 points from Damion Sanchez and 10 from Zach Watts.

Aztec has already won four more games than it did all of last season, but coach Matthew Steinfeldt said nights like tonight prove his team is still learning how to win games.

"First and foremost, we're trying to identify who our (starting) five should be," Steinfeldt said. "We're not overly consistent. The kids work extremely hard, I have no doubt about their character. But this is who we are at this point; we'll play close and then face adversity that we don't respond extremely well to."

The Tigers didn't do themselves any favors by missing what Steinfeldt estimated to be "10 to 15 shots within 3 feet of the basket."