Bloomfield staves off Aztec 44-43 at home

The Bloomfield girls basketball team benefited from solid outside shooting and great free-throw shooting against Aztec.

Bloomfield staves off Aztec 44-43 at home

Bloomfield's Destiny Walther drives the lane against Aztec's Sierra Sanders on Friday at Bobcat Gym in Bloomfield.(Photo: Jesse Hankins/Special to The Daily Times)

BLOOMFIELD — Despite a 6-point first half, the Aztec girls basketball team had an opportunity to send tonight's district game against Bloomfield into overtime, but a mental mistake on the final sequence cost the visitors.

Down by 3 points with 5.4 seconds left in the game, Aztec coach Robert McCaskill drew up a play during a timeout designed for Jessi Gellentine to attempt a game-tying 3-pointer. But the sophomore panicked when a Bloomfield defender collapsed on her, and she drove inside for a layup as time ran out.

McCaskill said the mental error on the final play represented the ongoing growing pains for the program.

"We're still Aztec; we're not a basketball community," he said. "We're still trying to get them to be able to do the little things basketball players do without coaches telling them to do it. They're acting a little bit like a robot. The play broke down just a little bit, but she still didn't take the shot."

McCaskill went with Gellentine because she was the hot hand in the fourth quarter, with 9 points during that frame. She also came up with two clutch steals in the final three minutes to help dig Aztec nearly all the way out of a 36-23 hole by the end of the third quarter.

The Lady Tigers (11-7, 0-2) had to do so much digging because of their lackluster first half. After scoring a bucket on the very first possession of the game, Aztec went nearly 14 minutes before scoring its second field goal.

"We had a lot of open shots in the first half, we had a lot of drives, we had our post open, and it just wouldn't fall," McCaskill said. "It was just a rough go of it. We've just been two different teams."

The Lady Bobcats weren't at their best in the first half, either, as they were playing without starting guard Brandi Alcantar, who missed the contest after spraining her MCL in Tuesday's win over Miyamura. 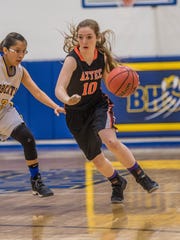 But they got a solid performance out of Sierra Ortiz, who drained three 3-pointers on her way to 15 points, which tied Aztec's Reigan Weaver for a game high.

Weaver's presence was felt on both ends of the court. The Lady Tiger offense got going once Weaver's teammates made an effort to feed her the ball, as Weaver scored all 15 of her points after halftime.

"With the tall girl taking away Destiny, we knew we had to hit our outside shots, and we did," Bloomfield coach Tom Adair said.

Tough defense and Weaver's offensive awakening after halftime were the primary reasons for Aztec's surge. Bloomfield was shaky in the face of Aztec's defensive pressure down the stretch, committing multiple turnovers. But in the 1-point win, the Lady Bobcats' ability to hit their free throws was the difference.

Bloomfield was 10 for 10 from the free-throw line after halftime and six for six in the final quarter. Aztec was eight of 15 with its free throws after half.

Aztec tries to break into the win column in district when it heads to Farmington (6-11) on Tuesday. On the same night, Bloomfield visits Gallup (9-8).