FARMINGTON — The Farmington boys basketball team has relied heavily on its seniors this season.

Farmington's Nick Granger drives past the Gallup defense on Thursday at Scorpion Gym.(Photo: Jesse Hankins/Special to The Daily Times)

FARMINGTON — The Farmington boys basketball team has relied heavily on its seniors this season.

The core group of seniors led the Scorps to a 14-2 record in nondistrict play, and in their District 1-5A opener against Gallup, the senior class made all the plays it needed to in order to topple the Bengals 61-50 tonight at Scorpion Gym.

Farmington’s starting five for the night — made up of seniors Sol Rascon, Kody Becenti, Keaton Christy, Nick Granger and David Riley — combined to score 57 of the teams 61 points.

“Our season goes as our seniors do,” Farmington coach Paul Corley said. “They’re a great group of kids to coach, and they're part of the reason we’re having some success.”

Throughout the night, Gallup played a 2-3 zone defense to negate the size advantage the Scorps had in the post. But time and time again, the Bengals failed at stopping Farmington from getting the ball to the high post — the weakest point of the defense. 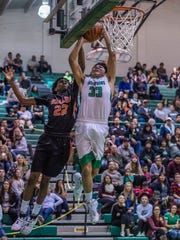 “We had a hard time shooting from the perimeter, so I made one adjustment and put Sol at the high post and David down in the feeder spot," Corley said. "Then, they really had to guard David down low, and it opened up a lot of stuff for Sol and Kody at the free-throw line, and they did a great job making good reads.”

The Scorps led most of the first half by 8 or more points, stretching their lead to 15 at one point in the second quarter before taking a 35-24 lead into halftime.

But in the second half, the Bengals made a push and cut Farmington’s lead to 46-40 heading to the fourth quarter.

The 6-point deficit was as close as the Bengals could get, and the Scorps pulled away in the final minutes to lock up the win.

“It’s always really important to start 1-0 (in district),” said Becenti, who scored 7 of his 12 points in the fourth quarter. “We’ve been focused all year, but it’s a little bit of a different mindset in district because it’s kind of like a new season. We need to keep doing what we’re doing right now.”

Farmington will be back in action on Saturday, travelling to Kirtland to face the Broncos (9-7, 1-0).