Farmington boys hold off Pius on the road; Lady Panthers lose by 20 points to second 6A opponent in as many days 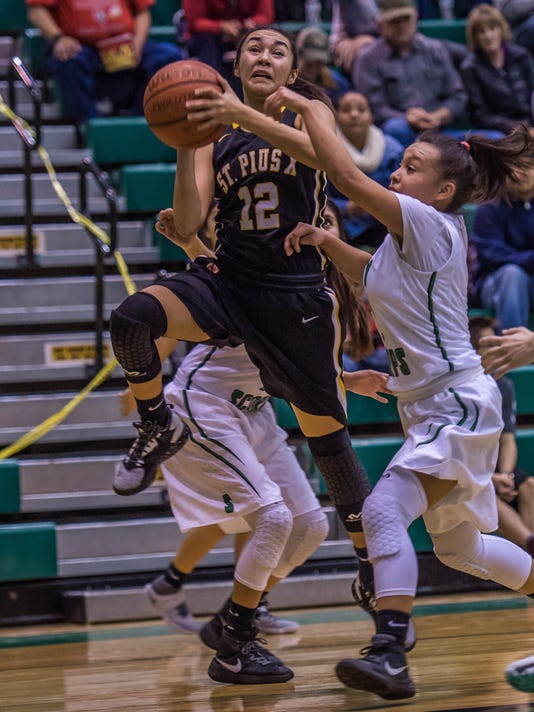 Maya Trujillo of St. Pius X splits the Farmington defense for a layup on Saturday at Scorpion Gym in Farmington.(Photo: Jesse Hankins/Special to The Daily Times)

FARMINGTON — The injury bug has been merciless to the Farmington girls basketball team this week.

“They go as she goes,” Lady Scorps coach Brady Rivers said of Trujillo. “She controls the offense. She hit 11 of the their first 18 points.”

Jordan Vazquez picked up 9 points for Farmington (6-9), which has lost four of its last five games.

The Lady Scorps hope to get Denny back in time for their first district game at Gallup (7-7) on Tuesday. Denny is scheduled to meet with doctors that morning and will play if she gets some good news.

Back-to-back games against tough competition proved to be too much for the Lady Panthers, who couldn’t keep up with West Mesa in the fourth quarter and fell to the Lady Mustangs 65-45 today at the Jerry A. Conner Fieldhouse.

“We got the lead down to 11 midway through the fourth quarter but ran out of gas,” PV coach Joe Reed said. “Playing two tough teams on back-to-back nights got the best of our legs.”

Farmington's Brianna Charley drives past Taylor Reed of St. Pius X during their game on Saturday at Scorpion Gym in Farmington. (Photo: Jesse Hankins/Special to The Daily Times)

The two losses in two days came with an additional blow to the Lady Panthers, who saw point guard Haley Blackie suffer a concussion during the game. The injury now puts PV down to its third-string point guard with Blackie and regular starter Alexis Long out with injuries.

The Lady Panthers will be off until Friday, when they open District 1-6A play against Cibola in Albuquerque.

The wear and tear of a busy week proved to be too much for the Northwest girls basketball team as the Lady Falcons fell to Walatowa 48-22 today at the Cuba Invitational.

Northwest coach Mike Christy said the Lady Falcons lacked energy in the game. After playing four road games during the week, Northwest struggled to match up against the bigger, more aggressive Lady Cougars.

Naomi Begaye finished with 8 points for Northwest and was named to the all-tournament team.

The Lady Falcons will get their first home game of the season Tuesday, hosting Tse’ Yi’ Gai in a District 1-2A game.

“It was a 1-point game with about a minute left, and we ended it on a 6-0 run. The boys held their composure well and made their free throws at the end of the game,” Farmington coach Paul Corley said.

Nick Granger led the Scorps with 16 points, 14 of which came in the second half. David Riley added 13.

Corley also praised the play of Ned Merrion and Keaton Christy, who came off the bench to provide a spark and combined for 17 points.

Farmington will open play in District 1-5A by hosting Gallup on Thursday.

Corley said the focus for the Scorps heading into the district schedule will be on the defense and maybe adding a few wrinkles to keep their opponents on their toes.

Aztec brought the fight to Los Lunas in the early going tonight, but couldn't keep it going for four quarters.

Going into the game as the underdog, Aztec coach Matthew Steinfeldt said he told his team to play up to Los Lunas' level. Afterward, he said he felt like his guys succeeded in doing that.

"I told the kids, 'Anytime you get a chance to play a team as talented as Los Lunas, you get a chance to elevate and gravitate to a higher level, and I really felt like we did that," he said. "We continued to battle throughout the game. The kids played one of their toughest games of the year."

Los Lunas wore Aztec down by keeping the hosts' guards away from the basket defensively while remaining patient on offense.

"The discipline and intensity they play with is certainly something we aspired to match, and at many points over the course of the game, we did," Steinfeldt said.

Chase Morrison had 10 points as the only Aztec player to reach double figures. The Tigers visit Kirtland Central (8-7) on Thursday.