Shiprock Northwest teams trying to get on track

It's been a rocky road so far for the Shiprock Northwest High School basketball teams.

Shiprock Northwest teams trying to get on track

Shiprock Northwest coach Mike Christie talks to his players during a game against Red Mesa, Ariz., on Dec. 3 at the Chieftain Pit in Shiprock.(Photo: Steve Lewis/The Daily Times)Buy Photo

FARMINGTON — As the first month of the high school basketball season comes to a close, the Shiprock Northwest boys and girls squads have struggled to the tune of a 1-12 combined record.

Class 2A's Northwest teams should have been more competitive this year. Both programs have had an uphill battle putting a quality product on the court, mostly because their talented middle school players have had a tendency to transfer to Shiprock or Navajo Prep — two bigger, more successful schools for basketball — once they reach high school.

The Shiprock Northwest Middle School boys and girls teams have both gone undefeated over the last two seasons. But the entire 2015-2016 boys roster has transferred, while all but one Lady Falcon — Mia Wilson  — moved on. Wilson starts for Northwest as a freshman.

To buck this trend, first-year Lady Falcons coach Mike Christie said the first step is to start winning at the high school level.

"The first thing that sways that is success," Christie said. "That's the first thing I gotta do is start winning some games. Hopefully, the kids will know how much I'm committed to them and will see that. I've talked to my eighth graders all the time about what we want to build here. That's basically what I did at (Piedra Vista). They never had success there. I built something. We played in district championships and then all of a sudden we got numerous kids playing ball." 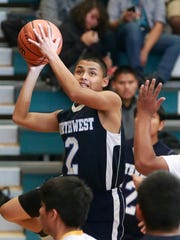 Shiprock Northwest's Tremaine Benally eyes the basket during a game against Navajo Prep on Dec. 8 at the Eagles Nest in Farmington. (Photo: Steve Lewis/The Daily Times)

The 1-5 Lady Falcons are slowly adjusting to Christie, who has been coaching prep hoops in the area for 19 years and was at PV from 2008-2013. Christie said it's been tough to find success on the court.

"Learning to play man-to-man defense has been a big adjustment to them," Christie said. "We have a habit to just run down to the box and play a zone. So breaking those habits has been a whole new experience. Second thing is, we are very inexperienced with only senior."

The coach said he is working over the holiday break to improve Northwest's full-court pressure to create more easy baskets. He said his players have been more than willing to put in the time it takes to improve.

"It's a great group of kids," Christie said. "I was told they want to commit to practices over vacations, and I've had just about every kid every day. I'm loving what the kids are doing, and we're just gonna keep working at it, and hopefully we have success."

“It's a great group of kids. I was told they want to commit to practices over vacations, and I've had just about every kid every day. I'm loving what the kids are doing, and we're just gonna keep working at it, and hopefully we have success.”

The boys have yet to enter the win column under second-year coach and Shiprock High School graduate Devon Lapahie.

Northwest returned five players from last season's 3-16 team, and that's something Lapahie is trying to feed off of.

"Right now, I have a good post player, his name's Elijah Mark. And I have a good shooter in Zachary Hunt," Lapahie said. "So I'm trying to get some help for those guys. Some of these boys have never played varsity basketball, so we're a little bit young, and it's all a learning process right now. And I keep telling them that."

One issue Lapahie points to that has impeded Northwest's basketball progress is a lack of stability with coaching contracts. Lapahie said his contracts with Northwest are on a season-to-season basis, and he has to reapply each year.

That means that from the end of the season in February until early November, Lapahie is away from his team, instead of getting ahead and coaching them during the spring and summer.

"That's the disadvantage I have right now, I don't have that off-season and those camps," Lapahie said. "That's what you build off of, is the off-season." 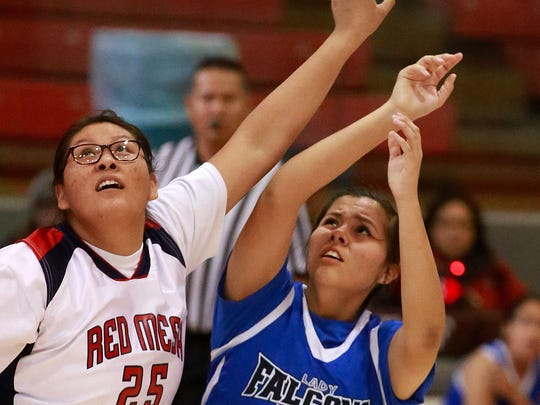 There are only two seniors on the Northwest roster, including Mark, who recently made the North All-Star team for 2A, six-man football. But there is hope for the Falcons for the rest of the season, according to Lapahie, who will begin playing schools closer to Northwest's enrollment size starting on Wednesday when the team plays Cibecue of Arizona's 1A Division. Two of Northwest's losses have come against Navajo Prep and Durango, Colo., which are both larger programs.

Another reason for optimism on the boys side is the return of a junior varsity team this year, something Northwest has been without for more than three years, Lapahie said.

"Last year, I had the opposite problem," he said. "I started the season with six or seven boys. And to triple the number of kids coming to try out from six to about 20, I was really happy to see it. Hopefully, we'll get to carry on (with a JV team) next semester. We'll see how grades go."

While the Northwest boys get going against Cibecue in Arizona's Native Basketball Tournament, the Lady Falcons will next play in the small-school bracket of the Striking Eagle Tournament in Albuquerque, which starts Wednesday and continues through Friday.