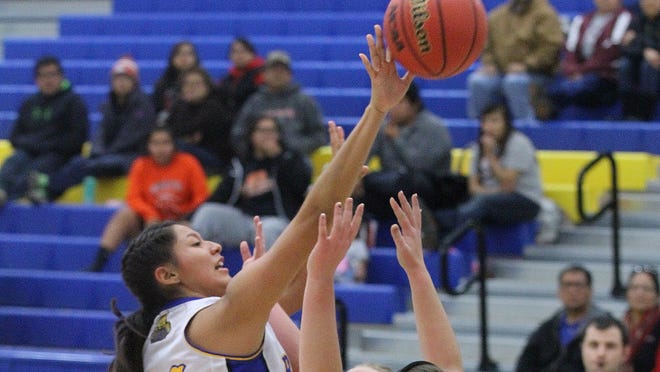 After narrowly defeating its last two opponents — Grants and Piedra Vista — by a combined 6 points, the Lady Bobcats (7-1) exploded against Montezuma-Cortez, Colo., today for a 59-11 win at Bobcat Gym.

The highest point total the Lady Panthers (1-4) mustered in any quarter was 4, which they reached in both the first and fourth quarters.

The Lady Bobcats brought a 34-6 lead with them into halftime and decided to let up on their full-court press for the final two quarters. Bloomfield coach Tom Adair said his bench got more time than the starters in the blowout win.

"The best thing about a win like this is, all the kids got to play a lot," Adair said. "And everybody scored."

Destiny Walther led the hosts in scoring with 11 points. Alyssa Quintana and Mattie Waresback combined for 17 off the bench.

Adair said Quintana, a junior power forward who played junior varsity ball last season, is having a very good start to the season.

"She's very good inside and has a good outside shot," Adair said. "She plays good defense and is an excellent rebounder for us, as well."

The Lady Bobcats are off for a week and a half before participating in the Los Lunas Tournament from Dec. 28-30.

The Lady Broncos learned from their discombobulated third-quarter effort versus Los Lunas on Friday and used the third quarter to break Valencia today on the road.

Ahead just 16-15 at halftime, Haile Gleason's 7 points and three assists in the third quarter helped Kirtland Central zoom to an 18-3 run in the frame. The big third period propelled KC to a 42-27 win over Valencia (2-5) on the road.

"We took our time, when easier scoring opportunities approached we took advantage of it," KC coach John Zecca said. "Those are definitely some improvements from previous games where we kind of gave up leads."

The defense has been better in the past couple of weeks for Aztec.

The Lady Tigers made it three wins in a row today when they downed Bernalillo 61-25 at Lillywhite Gym in Aztec.

The win marks the second straight time the Lady Tigers have held their opponents to less than 35 points.

"The defense is looking better, especially the way I like for my defense to play," Aztec coach Robert McCaskill said. "So we're starting to hit our groove defensively."

Reigan Weaver had a team-high 12 points for Aztec.

The three-game win streak comes on top of a two-game losing skid, to put the Lady Tigers at 5-2 on the season.

The Scorpions (8-1) capped a dominant run at this weekend's Wingate Holiday Classic by smashing the hosts 71-36 today in the final.

FHS coach Paul Corley said the tournament allowed him to play his reserves while serving as a fun event for his players before the holiday layoff.

"We got to develop our bench a little deeper, that's the most important thing, develop more team unity," Corley said. "And we just enjoyed the tournament. That was big for our kids."

The defense clicked for Farmington, which constantly converted turnovers into easy baskets.

Becenti, Jacob Brown and David Riley were named to the all-tournament team.

FHS gets back to work against Artesia on Dec. 28 as part of Roswell's Poe Corn Invitational.

Kirtland Central (4-6) was scheduled to play Gallup on the final day of the Eddie Peña Holiday Classic in Grants, but KC coach Brian Dowdy said Gallup decided to turn its bus around due to unsafe roads early this morning, and the game was canceled.

Bryson Dowdy and Jariah Setzer were named to the all-tournament team for KC.