Chieftains pull away from PV for 63-57 victory

Chieftains pull away from PV for 63-57 victory 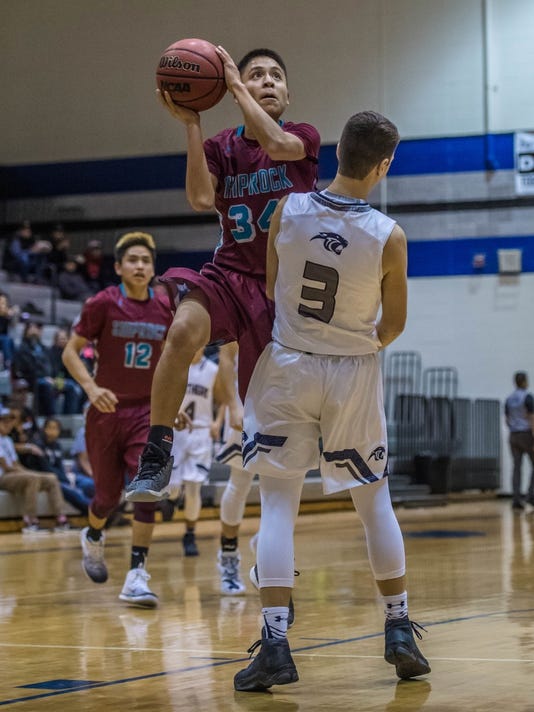 Shiprock's Landon Henderson takes a shot over Piedra Vista's Brady Brown Tuesday at the Jerry A. Conner Fieldhouse in Farmington.(Photo: Jesse Hankins/Special to The Daily Times)

FARMINGTON — After a rough showing at the Marv Sanders Invitational in Farmington last weekend, the Shiprock boys basketball team got a big 63-57 win over Piedra Vista tonight at the Jerry A. Conner Fieldhouse.

After struggling to get their offense going over the weekend and going 0-3, Shiprock jumped to an 18-10 lead after the first quarter, but relented in the second and trailed 29-28 at halftime.

Following a back-and-fourth third quarter, PV held a 43-41 lead heading to the fourth when the Chieftains got on a roll and opened up a lead.

“In the fourth quarter, we just played better,” Shiprock coach Chester Atcitty said. “We moved the ball better and executed. We played better defense and were on our toes and talking more.”

Shiprock (3-7) also converted at the free-throw line in the fourth, making seven of eight attempts.

PV coach Devon Manning said he hopes the loss will serve as an eye-opening experience for the Panthers (4-4), who came into the game with a wave of momentum after finishing second at the Marv Sanders Invite.

“There’s a laundry list of things that went wrong tonight,” Manning said. “Hopefully, they’ll realize they can't just show up and expect to win. We felt good about ourselves from this past weekend, and we thought we could walk in here and win, and Shiprock put it on us.” 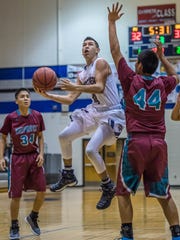 Four players scored in double figures for the Chiefs.

Shanden Todacheeny and Jarrett Graham led PV with 14 points each.

Shiprock will be off until Tuesday when the Chieftains play at Laguna Acoma (3-1).

The Aztec boys basketball team had a tough stretch at the Joe Armijo Tournament last weekend in Albuquerque, going 0-3. But the Tigers bounced back in their home opener, cruising past Wingate 63-42 tonight at Lillywhite Gym in Aztec.

“I thought it was a huge boost for us,” Aztec coach Matthew Steinfeldt said of playing at home. “We had an exciting finish in the (junior varsity) game, and there’s some excitement about the program. I know the kids are really excited about the progress they’ve made, and it was a great opportunity to show their families and friends and the community that, day by day, we’re getting better at basketball.”

The Tigers (4-3) asserted their dominance early, holding an 11-2 lead at the end of the first quarter and never let the Bears (1-4) get close enough to threaten the lead.

Aztec got big production from Cody Smith and Tanner Brooks in the post. Smith finished with 19 points and Brooks added 13. Steinfeldt said the duo pulled down 10 rebounds apiece, too.

Aztec will be back in action Thursday, traveling to Farmington to face Piedra Vista (4-4).

Kirtland Central and Durango, Colo., met for the second time in three days tonight, and while the final score was closer this time around, the Broncos were still on the losing side with a 43-41 loss at Bronco Arena in Kirtland.

“It was one of those back-and-forth games. The best way to liken it is, how teams feel each other out at the start of games, that’s kind of how all four quarters went,” KC coach Brian Dowdy said.

After a missed free throw from the Demons (6-1) in the final seconds, KC’s Jariah Setzer got a look at a game-winning 3-pointer. But the shot came up just short.

KC will travel to Grants on Thursday to face defending 5A state champs Española Valley (5-0) in the Eddy Peña Holiday Classic.