Chieftains get decimated by Fabens in fourth quarter, Broncos can't hold on to early lead against Durango 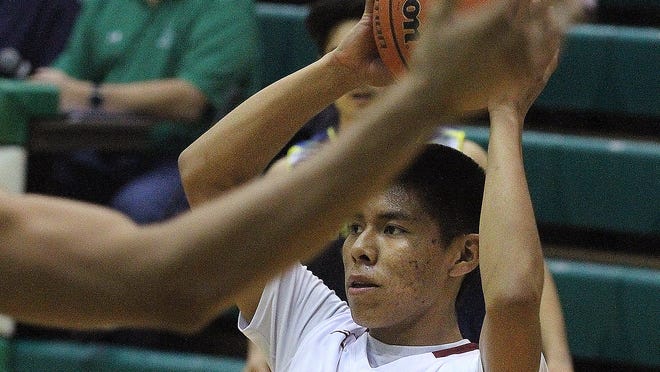 Fabens, Texas, caught fire in the fourth with 32 points and six 3-pointers and won 66-64 over Shiprock at Scorpion Gym.

In the second half, Shiprock (2-6) played its best quarter of the game, followed by its worst, scoring 18 points in the third before blowing a 47-34 advantage in the fourth.

Eleven Shiprock turnovers in the fourth quarter alone contributed to the late-game meltdown.

Down by 2 points inside the game’s final 15 seconds, the Chieftains still had opportunities to force turnovers and avoid fouling, but couldn’t possess the ball once they knocked it loose.

Fabens split a pair of free throws with 5.7 seconds to go in the game, but with a chance to tie it with a 3, Shiprock rushed the ball up court and coughed it up on a football pass that sailed out of bounds. That served as Shiprock’s nail in the coffin.

Cota Nahkai and Arvin Begay had 14 points apiece for Shiprock in the loss. One of the team’s usual starting guards, Landon Henderson, missed the game to take his college entrance exams.

Things don’t get any easier for the Chieftains on Tuesday when they head to Jerry A. Conner Fieldhouse to play Piedra Vista (4-3).

It was a bad case of déjà vu for Kirtland Central today in Farmington.

Much like they did against Farmington on Friday, the Broncos hung tight with Durango, Colo., for most of the game before unraveling late and watching the Demons speed off with 73-61 win in the third-place game of the Marv Sanders Invite at Scorpion Gym.

"The players even said it on the bench before I could say it: 'Same stuff as last night,'" KC coach Brian Dowdy said. "Defensively, we blew assignments all night long, just one after the other. Half the time, we didn't even know what defense we were in."

The Broncos (4-3) jumped to a 9-0 lead in the first quarter, but Dowdy said he thought that was more of a product of Durango missing shots than it was of KC playing well.

The Demons got hotter as the game went on and sank 11 3-pointers compared to Kirtland's four. Durango guard Kyle Kirkpatrick had six of those 3s.

"The one thing we've done well this year is adjusted and listened well in huddles," Dowdy said. "And tonight we just didn't have it, for whatever reason. We lost our focus."

KC went into halftime ahead by 6 points but relinquished the lead to the surging Demons, who outscored the Broncos 22-15 in the third quarter.

Bryson Dowdy did his best to keep the score close, scoring 15 of his team-high 24 points after halftime. But unlike in the Farmington loss, not a lot of Broncos contributed in the scoring column, as Dowdy and Eric Foutz were the only KC players to hit field goals in the second half.

The Broncos are in the middle of a 10-day, seven-game stretch. They are in Grants on Monday before coming back home for a rematch with Durango in Kirtland on Tuesday.