PV slips past Farmington with 38-37 victory

The rivalry between the Farmington and Piedra Vista girls basketball team is as strong as ever.

PV slips past Farmington with 38-37 victory

Piedra Vista's Kristi Lee Bennie, left, and Farmington's Lyla Denny battle for a loose ball on Thursday at the Chieftain Pit in Shiprock.(Photo: Jesse Hankins/Special to The Daily TImes)

SHIPROCK — The rivalry between the Farmington and Piedra Vista girls basketball team is as strong as ever.

In their first meeting of the season, the Lady Panthers and Lady Scorps overcame slow starts and traded blows in the second half, ending only after a buzzer-beater from Farmington’s Philinda Nez narrowly missed, giving PV a 38-37 victory during the Jerry Richardson Memorial Tournament today at the Chieftain Pit.

The two sides struggled to get their offenses going through the first half. At halftime, Farmington led 15-13, thanks to a 3-pointer from Brianna Charley that gave the Lady Scorps their first lead of the game.

“Familiarity has a lot to do with the struggles. It’s a rivalry game, and we’re so familiar with each other,” PV coach Joe Reed said. “These girls play against each other all year, and a lot of them play on the same summer teams. Any time we play, it’s going to be a dog fight."

PV’s offense got going in the third quarter, scoring more points in the quarter than it did in the first half. 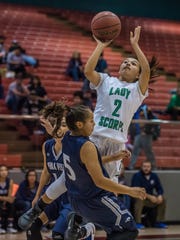 Farmington coach Brady Rivers said there wasn’t anything new to the game plan in the fourth quarter, just that the Lady Scorps began executing on offense and defense better.

“When things went well (before the fourth quarter) we were playing well on defense,” Rivers said. “We wanted to get rebounds and try to get out and go, and spread the court to start driving.”

After getting a defensive stop, the Lady Scorps found an open Lyla Denny on the left block that gave Farmington a 37-36 lead with 34 seconds to go.

Following a Farmington timeout to set up its defense, PV got the ball inside to Kristi Lee Bennie, who drew a foul with 15 seconds left. Bennie made the first free throw to tie at 37 and missed the second, but Alexis Long snagged the offensive rebound to give PV another chance. After swinging the ball around the perimeter, PV found Bennie open under the basket, drawing another foul with 6 seconds remaining.

Again, Bennie made the first and missed the second.

After the missed free throw, Farmington moved down the left sideline, and Nez got an open shot from the left wing at the buzzer. But the 3 was too strong, banking off the backboard and bouncing off of the rim.

Bennie scored 10 of her 12 points in the second half to lead the Lady Panther offense. 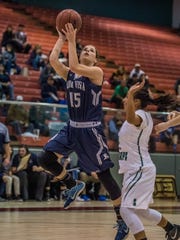 Piedra Vista's Dani Russo puts up a shot against Farmington on Thursday at the Chieftain Pit in Shiprock. (Photo: Jesse Hankins/Special to The Daily TImes)

PV and Farmington will continue play at the tourney Friday.

Farmington will take on Arizona’s Red Valley/Cove at noon and PV will play Red Mesa, Ariz., at 3 p.m.

The Northwest girls basketball team couldn’t get a shot to fall from the outside, dooming the Lady Falcons to a 44-36 loss to Arizona’s Red Valley/Cove today at the Jerry Richardson Memorial Tournament in Shiprock.

“We were down 6 to 8 points pretty much the whole game. They’d get the lead to 10, and we’d get it back to 6,” Northwest coach Mike Christy said. “We did work on a little man press and that caused some problems and got us some scoring opportunities, but we couldn’t make anything from outside.”

Along with the shooting struggles, Northwest (0-2) couldn’t keep Red Valley/Cove (1-0) off the offensive boards, giving up numerous second-chance points.

Kylie Denoyer and Rayeia Thomas each scored 9 points for the Lady Falcons.

Northwest will continue play at the tournament Friday, playing Whitehorse, Utah, at 3 p.m.

The Navajo Prep girls basketball team grinded out a great win on the young season tonight night, slipping past Taos (2-3) for a 53-50 victory in the first round of the Lady Braves Classic hosted by Santa Fe Indian School.

Prep coach Rainy Crisp said that for the second game in a row, the Lady Eagle defense was the difference maker, and she commended her team’s mental fortitude to hold on in a game that was never separated by more than 6 points.

“We didn’t get frazzled. We stayed calm. Even when the game was close, we stayed calm, executed our plays and kept our defense on lock down,” Crisp said. “It was great to see the team come together, and it was really great to see individual players step up.”

Prep will play the winner of Santa Fe Indian School and Zuni in the second round of the tournament Friday at 6:30 p.m.

The Aztec girls basketball team put together a strong performance in the first round of the Al Armendariz Tournament, cruising past Santa Fe (0-3) 64-46 today in Santa Fe.

Heading into the fourth quarter, Aztec held a 39-37 lead before taking control.

A slew of Lady Tigers filled up the stat sheet in the win.

Kamrynn Phelps finished the day with a double-double, scoring 14 points and grabbing 14 rebounds.