Throughout the first half, PV struggled to get its offense going. 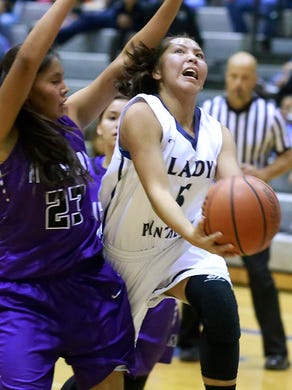 Piedra Vista's Dani Russo fights for the ball against Miyamura on Saturday at the Jerry A. Conner Fieldhouse. Steve Lewis/The Daily Times
Fullscreen

Piedra Vista's Hallie Blackie (23) gets control of the ball against Miyamuraon Saturday at the Jerry A. Conner Fieldhouse. Steve Lewis/The Daily Times
Fullscreen 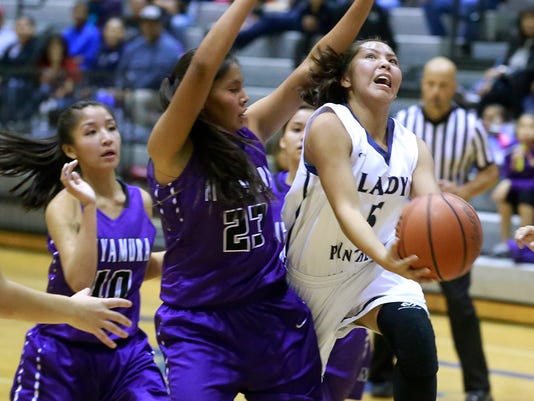 FARMINGTON — First-game jitters were evident for the Piedra Vista girls basketball team, but the Lady Panthers were able to overcome their nerves to pick up a 51-42 win over Miyamura tonight at the Jerry A. Conner Fieldhouse.

Throughout the first half, PV struggled to get its offense going. The Lady Panthers turned over the ball regularly as a result of the team’s nerves — and Miyamura’s ability to speed up the Lady Panthers with a full-court press — and missed a number of easy shots in the paint.

“First-game jitters definitely got to them. We had a bunch of missed layups and didn’t shoot free throws very well in the first half,” PV coach Joe Reed said.

With the slow start, the Lady Panthers (1-0) never created a lead of more than a few points over the Lady Patriots (0-1).

PV’s offense finally got in a rhythm during the third quarter.

At the five-minute mark of the quarter, with the score tied at 24, junior Hannah Sayyeau hit a 3-pointer from the top of the key that sparked a 15-7 run over the next four minutes.

“The talk in the locker room at halftime was that the third quarter has always been our worst quarter. We had to find a way to create energy,” Reed said. “We made some adjustments on the press, and it led to some turnovers and quick baskets. And we started shooting the ball a bit better after the nerves wore off.”

PV held a 39-34 lead to start the fourth quarter and spread the floor for the first few minutes of the quarter to try to pull Miyamura out of its 2-3 zone defense.

As time ticked away, the Lady Patriots were forced to extend the zone, which opened up driving lanes for the Lady Panthers to exploit for easy layups.

“The one thing at practice that I’ve really gotten upset about is our execution of the spread. I told them in the locker room (after the game) that their execution was great,” Reed said. “We weren’t trying to stall. We were trying to pull them out into man-to-man defense. They never did so we stayed in it and got great shot opportunities when the guards decided they wanted to drive to the hole.”

Hallie Blackie led PV with 14 points, 8 of which came in the fourth quarter.

Kristi Lee-Bennie finished with 10 points, and Dani Russo added 8 in the win. 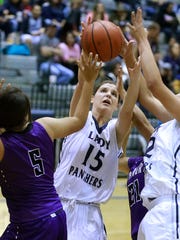 Piedra Vista's Dani Russo fights for the ball against Miyamura on Saturday at the Jerry A. Conner Fieldhouse. (Photo: Steve Lewis/The Daily Times)

PV was without its only senior, Elli Wright, who visited a college campus this weekend as part of her volleyball recruitment.

Reed said the Lady Panthers stepped up to the challenge of replacing Wright’s production, getting points from nine of the 10 players to enter the game.

PV will have another tough test in its next game, hosting Kirtland Central (0-0) on Tuesday.