The Navajo Prep boys basketball team's season ended with a 76-62 loss to Texico in the 3A quarterfinals.

RIO RANCHO – The Navajo Prep boys basketball team needed to play a near-perfect game in its 3A state quarterfinal match up against Texico if the Eagles were to advance.

The No. 10 Eagles played well, shooting better than 53 percent from the field, along with 50 percent from beyond the arc, but it still wasn’t enough to topple No. 2 Texico as the Wolverines knocked off Prep 76-62 Wednesday night at Rio Rancho High School.

“That’s just a good team. That team shoots the ball as well as any team I ever saw. They just shoot the ball well,” Prep head coach Rick Hoerner said of Texico. “But I have no complaints (about) my guys. We had a very good season for Navajo Prep.”

On the night, Texico connected on 23 of its 50 field goal attempts, along with making 21 of 25 free-throw attempts.

Entering the game against the bigger Wolverines, Prep’s ability to rebound was a concern for Hoerner.

Texico’s ability to dominate the boards played a major role in the outcome as the Wolverines recorded more offensive rebounds (17) than Prep did total rebounds (16).

After struggling in the opening minute, in which they turned the ball over on their first two possessions, the Eagles played well early in the game.

Following the two quick turnovers that resulted in 6 points for Texico, Prep went on a 10-2 run to take a 10-8 lead at the midway point of the first quarter. But then the nerves of playing in front of the largest crowd of the season got to the Eagles, who watched as the Wolverines outscored them 12-2 the rest of the quarter to take a 20-12 lead into the second.

“They kind of froze. They freaked out a little bit,” Hoerner said of the Eagle’s nerves. “The whole walk down the hallway (to the locker room) was a ‘Oh my gosh, did you see how many people are here?’ kind of a thing. But they haven’t had that type of experience, and to me, that’s valuable. They got to see what the state tournament is all about and play in that atmosphere and how intense it is. That can’t be anything but a good experience for us.”

Texico pushed its lead to 33-18 with two minutes remaining before halftime. The Eagles clawed back and cut the deficit to single digits in the final minute, but Texico responded and finished the quarter on a run that ended with 3-pointer at the buzzer to send the game to the break at 40-26. 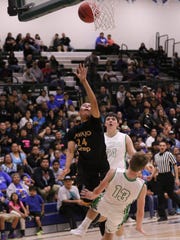 Texico carried the momentum from the end of second quarter into the third and outscored the Eagles 19-12 to take a 21-point advantage into the fourth.

Prep kept fighting, hitting four 3s in the final quarter, but the Wolverines made 13 of their 15 free-throw attempts in the fourth to keep the Eagles at bay.

It was Prep’s first trip to the quarterfinals in school history, and after finishing the season 21-8, the Eagles recorded more wins this season than they had in the previous three seasons combined when they went 19-54.

Prep will return all but four players from this year’s squad, and after getting a taste of the state tournament, Nez said he and the rest of the returning Eagles are eager to make the trip back next season.

“Next year, we’re going to come back stronger. We’re going to get back in the gym maybe next week — maybe even tomorrow,” Nez said. “This year, for me, was the experience of my life. I honestly didn’t think I’d be at where I’m at right now. The team worked hard and played together, and we’ll be back.”