Shiprock holds off Bloomfield for 65-52 win 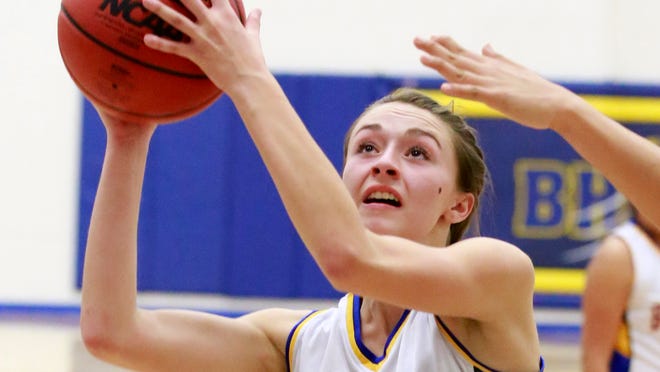 BLOOMFIELD – Facing a furious second-half comeback effort from Bloomfield, the Shiprock girls basketball team maintained its composure and pulled away in the fourth quarter for a 65-52 victory Tuesday night at Bobcat Gym.

“I was really impressed with the way they held their composure out there,” Shiprock head coach Larenson Henderson said. “I’m pleased we got the win tonight, especially on the road.”

While Henderson was happy with the win, he said the Lady Chieftains played a little too loose at times, which helped the Lady Bobcats in their comeback effort.

“I like the way they kept their poise, and when we run plays, we get good results. But when we run off and do our own thing, it’s hard,” he said. “I don’t want to stop them from playing, because they can play, but I think there is some discipline that they need to have and that we need to work on to make sure they understand the situations.”

“We battled. I’m very proud of them,” Bloomfield head coach Tom Adair said. “We cut it to 3 and gave ourselves an opportunity.”

Shiprock put together a 9-0 run over the first 1:38 of the fourth to push its lead back to 12 and maintained a lead of 8 or more the rest of the way to secure the win.

“I think they are finally understanding the importance of running plays, because they’re not always going to be shooting well,” Henderson said of the Lady Chieftains. “If we can execute plays and get into higher percentage shots, that’s what we want. I think they’re understanding that.”

Throughout the first half, the Lady Bobcats struggled to convert from the field, making just four field goals in the half.

Adair said part of his team’s shooting struggles in the first half was the result of being a bit over zealous, but ultimately, the Lady Bobcats need to learn how to finish close games against top competition.

Kirtland Central rallied from an 8-point deficit entering the fourth quarter and fought off Thoreau 56-50 Tuesday night at Bronco Arena in Kirtland to remain unbeaten in District 1-4A.

“Watching the game, you’d think we played a bad game. We weren’t missing a lot of shots, and we didn’t play bad, you just really have to credit Thoreau,” KC head coach John Zecca said. “They (Thoreau) really came out and played well.”

Zecca said the KC defense wasn’t as good as it has been the last few weeks, and Thoreau (6-16, 1-6) made shots when the Lady Hawks found openings.

KC (17-5, 7-0) trailed 44-36 after three quarters, but picked up the intensity during the fourth to lock Thoreau down and pick up the win.

“We weren’t having a whole lot go our way during the game, as far as getting loose balls and things like that,” Zecca said. “We picked up the intensity, put pressure on them and forced them into some bad shots. I think it was just a do-or-die situation, and the girls knew they had to pick it up.”

Prep will host To’hajiilee (6-9) in a nondistrict game tonight at 7.

Prep head coach Rainy Crisp could not be reached for comment.