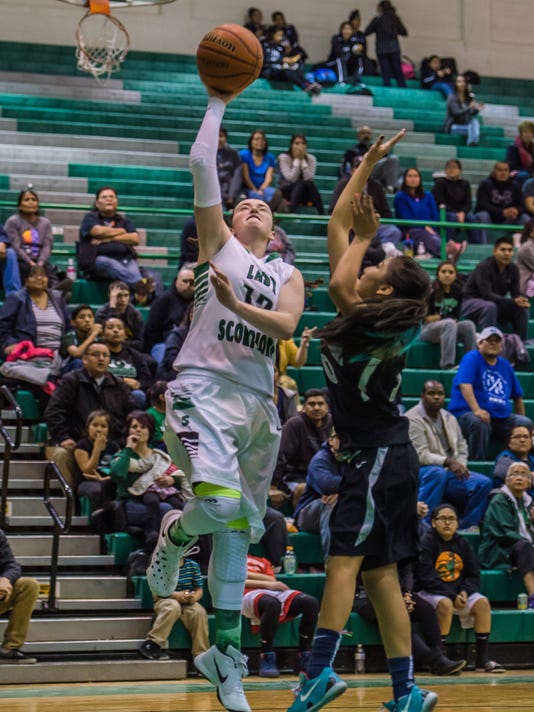 Farmington's Shayla Carlowe goes up for a layup in a game against Miyamura on Thursday at Scorpion Gym in Farmington.(Photo: Jesse Hankins/Special to the Daily Times)

FARMINGTON – The Farmington girls basketball team exploited Miyamura's transition defense all game long on Thursday, and that propelled the hosts to a 59-41 win at Scorpion Gym.

Meeya Yazzie scored a game-high 22 points, mostly on uncontested layups in transition, to guide her Lady Scorpions (8-7) to their first district win in as many tries.

Miyamura (6-9) kept it close after the first quarter, trailing only by 4 points, but an excess of turnovers led directly to an 11-2 Lady Scorpion run in the second quarter. And every time Farmington ripped down a defensive rebound or stole a pass, it was off to races.

After dropping 31 points in a win against St. Pius X on Saturday, Yazzie stayed hot by scoring 16 of her team's 26 first-half points on Thursday. FHS coach Danny Secrest said he thinks she's in the zone right now.

"She's just feeling it," he said. "Her confidence is way up there right now. She'll see the floor more and more if she keeps rolling like this, and I think she knows that."

FHS did suffer through a couple of lulls in the third quarter. The team failed to close out on Lady Patriot 3-point shooters on back-to-back possessions, and the visitors made them pay.

Still, the best Miyamura could do was chop the deficit to 6 points before the Lady Scorpions refocused.

A Tanisha Beetso triple and a combined three easy scores in transition from Yazzie and Shayla Carlowe made up a 10-0 Farmington run to close the third quarter.

"Our intensity was a little better, and our defense picked up toward the end of the third quarter, so that was nice," Secrest said. "And we really started finishing at the basket, which is something we struggled to do in the first half."

The hosts' emphatic finish to the third quarter effectively ended the game. Up 41-24 by the start of the fourth, Secrest had the luxury of giving his reserves some extended playing time as the Lady Scorps coasted to victory.

Farmington's Meeya Yazzie shoots a layup in a game against Miyamura on Thursday at Scorpion Gym in Farmington. (Photo: Jesse Hankins/Special to The Daily Times)

The win is Farmington's third in a row. Brighton Clah had the short jump shot working for the Lady Scorps off the bench, and she chimed in with 10 points.

The Lady Scorps will likely have a much tougher go of it on Saturday when they head to Lilywhite Gym to take on Aztec (15-4). The Lady Tigers knocked off Piedra Vista 58-50 on Thursday and have won 12 of their last 14 games.

Secrest said if his team hopes to go to Aztec and pull off the upset, it will have to be much more disciplined on the defensive end.

"We really have to do a better job of getting out in front of shooters because Aztec will make you pay if you don't," he said. "They live right out here (at the 3-point line) so we're gonna definitely have to learn how to close out against these teams that can shoot it."