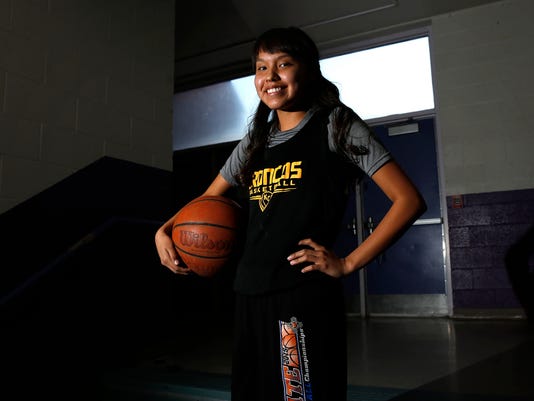 It hasn't been by design. But as first-year head coach John Zecca has dealt with a litany of injuries this season, sophomores, freshmen and even eighth graders have contributed largely to KC's 8-3 start.

At the center of that has been sophomore shooting guard Haile Gleason.

With team-high averages of 15.4 points and 1.8 steals per game, Gleason is off to a tremendous start. Injuries have forced her to step up — she's one of only four players to play in all 11 games — but luckily for KC, her game looks anything but forced.

"She's been our leading scorer all year, and that's always important, but she also does a lot of other things that don't get noticed," Zecca said. "She's right there at the top in assists and steals, and she's been rebounding much better lately."

Gleason's offensive repertoire looks more like a senior's than a sophomore's. Her 47 percent shooting percentage from 3-point range indicates she takes smarts shots, not just any shots. She's also flashed the ability to finish at the rim with either hand and isn't afraid to mix it up on the offensive glass to score a put-back bucket.

After going 3-0 at Kirtland Central's Lady Bronco Tournament this weekend, Gleason and teammate Shamika Benally were named to the all-tournament team.

Gleason didn't jump off the stat sheet offensively in KC's first two wins, but that's because she didn't have to. She deferred to a red-hot Benally in Friday's win over Bloomfield before heating up herself against Farmington on Saturday with 21 points.

She also contributed in other ways, which caught the attention of her coach.

"A couple times against Farmington, I saw her really use her jumping ability. She would go up in a crowd of people and pull the ball down at the top of her jump," he said. "You don't see enough of that in the girls game. It just shows that she's got a good basketball sense."

At 5 feet 6 inches tall, Gleason doesn't always have the height advantage in her match-ups, but she knows how to use her length and wingspan to her benefit. And on offense, she's learning how to play without the ball, according to Zecca. All of these factors point to an all-around game that should be fully polished by the time she is a senior.

Gleason has embraced her role as Kirtland's go-to scorer, but still places a premium on defense.

"Defense is how you win games," she said. "It's not all about points for me, it's about our whole team getting the win. I know that to do that, we all gotta keep getting better on defense."

Senior leaders and starters Deiondra Smith and Krystal Sheka have missed a combined six games this season. As a result, Zecca has been forced to shuffle his lineups and rely on some of his junior varsity players.

Freshmen Tiajhae Nez and Aubrey Thomas, along with eighth grader Talia Ockerman, have shined at different points in the season. Because she is in the same age group as those players, Gleason has played with them long before any of the girls donned Kirtland Central's purple and gold uniforms. So adjusting to playing alongside them hasn't been difficult for Gleason.

"We played in middle school together and in a lot of tournaments the past few years," Gleason said. "I'm used to them, and I'm happy they're getting a chance. It's cool to play with the kids I grew up with."

Zecca said a deep-rooted love for basketball in Kirtland is part of the reason KC has the luxury of so many varsity-ready contributors in its system.

"That's the benefit you have from being a tight-knit community or smaller community, where generally these girls grow up with a basketball in their hands," he said. "It does usually translate into their high school years, where they know each other well and have been playing with each other for a long time, even with a one- or two-year age difference."

The Lady Broncos are finally starting to get healthy and are currently riding a six-game winning streak. Though the future is in good hands with Gleason, Nez, Ockerman and others, KC is thinking about making a run right now.

"Coach Zecca has taught us to kind of slow down and be patient, and I think that's been good for me," Gleason said. "And our defense is coming along. We gotta keeping working hard on that and on communicating. I don't think we are where we want to be yet, but I'm excited for the next few months."

"Not making my parents proud."

"Invest it and save it for college."

"There's this quote my uncle and brother used to tell me, and I repeat it all the time when I'm warming up. It's 'Basketball is 90 percent mental and 10 percent physical.'"