The Aztec girls basketball team earned what could turn out to be a season-defining win Friday night.

Aztec's Grace Olsen takes a shot during a game against Los Alamos during the Aztec Lady Tigers Rumble on Friday at Lillywhite Gym in Aztec.(Photo: Jesse Hankins/Specail to the Daily Times)

AZTEC – The Aztec girls basketball team earned what could turn out to be a season-defining win Friday night.

The Lady Tigers fought from start to finish and held off Los Alamos for a 40-38 victory during the Aztec Lady Tigers Rumble at Lillywhite Gym.

“This is a big win for them,” Aztec head coach Robert McCaskill said. “They (the Lady Hilltoppers) are a perennial (top) team in the state. We’ve been working really hard this season and focusing on playing a whole game, and we did that tonight.”

After Los Alamos (11-4) led for the majority of the game, the Lady Tigers (14-2) went on a 6-0 run to take a 29-24 lead with two minutes remaining in the third quarter. The Lady Hilltoppers then recaptured the lead, hitting a 3-pointer to make it 32-31 with 6:26 left in the fourth quarter. The two teams went back and forth the rest of the game, with neither side building more than a 2-point advantage.

With just more than two-minutes remaining and Los Alamos threatening, Aztec freshman post Reigan Weaver came up with back-to-back blocks in the paint to keep Aztec in control.

Clinging to a 39-38 lead with 55 seconds remaining, Aztec’s Myra McCaskill drew a foul and went to the free-throw line to shoot one-and-one. She drained the first, then made the second, but the sophomore, thinking she had missed the shot, entered the lane before the ball touched the rim, anticipating a rebound. The second free throw was waved off, keeping it a 2-point game.

The Lady Tigers came up with a defensive stop, and Aztec senior Elana Kresl was sent to the line for another one-and-one and a chance to ice the game with 12 seconds left. But Kresl missed the first free throw, and Los Alamos took possession, giving the visitors hope.

The Lady Hilltoppers found an open lane to the hoop, but missed a layup at the buzzer to give the Lady Tigers the win.

Aztec's Myra McCaskill lays the ball up during a game against Los Alamos during the Aztec Lady Tigers Rumble on Friday at Lillywhite Gym in Aztec. (Photo: Jesse Hankins/Specail to the Daily Times)

The victory could mean a lot for Aztec come March, when seeding for the state tournament is decided. And the experience of playing and winning in a tight game against a quality opponent should help the Lady Tigers' confidence in close games during the district schedule.

“It’s going to help a lot down the road,” McCaskill said. “We still have to fix a lot of mistakes, and they’re still pretty nervous. We have a lot of young girls, and this is a great experience for them.”

Aztec had little trouble in its first game of the tournament, thrashing Monument Valley, Utah, 66-15.

The bulk of Aztec's points came on second chances. Monument Valley sat in a 1-3-1 zone defense, and throughout the game, the Lady Cougars (2-4) showed little interest in finding someone to box out. The Lady Tigers took advantage and cleaned up missed shots by pulling down offensive rebounds on the weak side and getting uncontested put-backs.

Adrianna Sanders and Weaver scored 12 points each in the win over Monument Valley.

Shiprock head coach Larenson Henderson has been waiting for his team to have a close battle this season, and he got it Friday.

In the first round of the Aztec Lady Tigers Rumble, the Lady Chieftains fought from opening tip to the final buzzer with Los Alamos and came up with a 55-53 victory at Lillywhite Gym.

"We need games like this," Henderson said. "We fought the whole way, and I'm proud of the girls because they never gave in to the pressure. If they did, we would have lost the game." 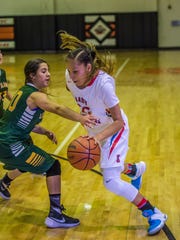 Throughout the final quarter, the Lady Hilltoppers cut the deficit to 3 points, only to have Shiprock push its lead back to 7 points.

Down 52-51, Los Alamos had a chance to take the lead with a minute remaining, but missed two open layups.

Shiprock's Tanisha Begay then drained two free throws with 20 seconds left to push the lead to 55-51 and secure the win.

"I'm really excited because it was a good game, and we made those pressure free throws," Henderson said. "It's one thing to be in practice and say, 'There's two seconds left,' but here, everything was bearing down on them."

Shiprock converted 5 of 7 free throws in the fourth quarter.

Begay scored 10 of her 14 points in the second half to lead Shiprock's scoring effort. Tia Woods and Paige Dale added 13 and 10 points.

Shiprock's second game of the day went a bit smoother, as the Lady Chieftains knocked off Fruita Monument, Colo., 59-45.

The Lady Wildcats (10-4) led 13-10 after controlling the tempo in the first quarter. But Shiprock began to dictate the pace and caught fire from beyond the arc to pull away in the second quarter, never looking back for a 32-20 halftime lead. 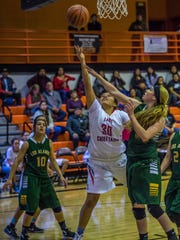 Shiprock's Tia Woods lays the ball up during a game against Los Alamos during the Aztec Lady Tigers Rumble on Friday at Lillywhite Gym in Aztec. (Photo: Jesse Hankins/Specail to the Daily Times)

"They (the Lady Wildcats) couldn't defend the weak-side screens, and it allowed us to take a lot of 3s when we came up to the top," Henderson said. "When we're set well, we're going to hit shots. Every time we executed, it was perfect."

Shiprock made nine 3-pointers in the game.