The Farmington Scorpions celebrate their 5-3 win over the Goddard Rockets in Saturday's 5A state baseball championship game at Isotopes Park in Albuquerque. FHS won its first state title since 2008.(Photo: Jim Thompson/Albuquerque Journal)

FARMINGTON – For the first time in a decade, the blue trophy is headed back to Farmington High School.

“It’s outstanding. It’s been a long time coming. I’m so excited for the kids, so proud of them,” coach Sean Trotter said. “They’re all jazzed up and excited. The goal has been achieved. I’m having a hard time wrapping it around my brain myself.”

Trotter said Cordova, who started today’s game, had some trouble with his fastball and off-speed pitches but kept grinding out strong innings despite not having any good secondary pitches to go with. Trotter also said Jaramillo was particularly effective throwing his change-up coming on in relief.

“They did a good job of pitching to contact, not getting hurt with pitches up in the zone,” Trotter said.

Cordova and Jaramillo combined for six innings of work, and Danny Carpenter picked up the save in the top of the seventh inning.

Josh Spellbring and Emilio Prado both hit a combined 6-for-6 with three RBIs at the plate. 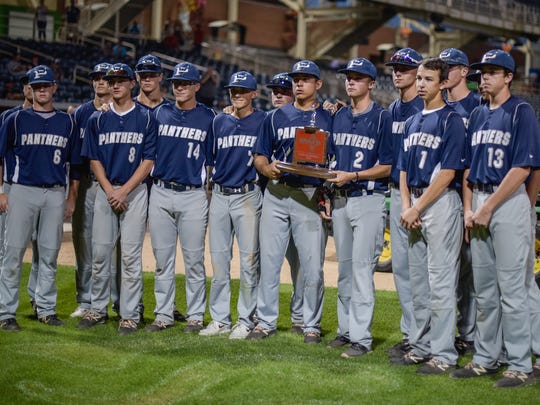 One win away from a possible 5A title, the Lady Scorpions came up just short facing defending state runner-up Artesia. AHS won both games (13-2 and 13-0) today to win its first title since 2001.

PV (23-8) returned to the state title game for the first time since its 2014 championship season.

Although Farmington (20-11-1) was denied what would've been its first state title since 2004, coach Tim Trotter has the Lady Scorpions going in the right direction.

After winning just five games in 2016, FHS has 33 combined wins over the last two years. 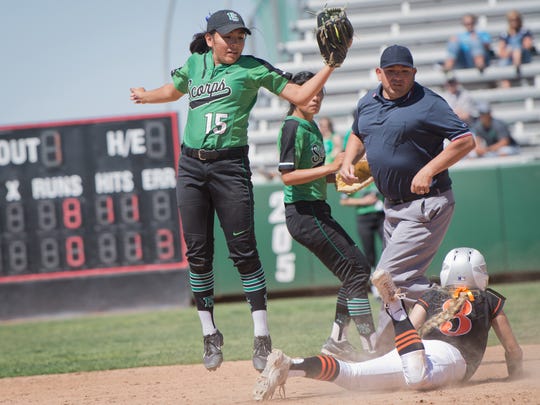 Farmington's Autumn Thomas comes down with a catch after Artesia's Alexa Riggs safely slides into second base during the first game of the 5A state championship finals Saturday in Albuquerque. Artesia won both games, 13-2 and 13-0, to win the title. (Photo: Marla Brose/Albuquerque Journal)