FARMINGTON — Strike Zone will once again represent Farmington as the host team for the Connie Mack World Series.

Drew Gillespie of Strike Zone expresses his frustration after fouling a bunt off of the plate as 4-Corners' Andrew Caliendo catches the ball during the Connie Mack City Tournament championship game on Saturday at Ricketts Park. Steve Lewis/The Daily Times
Fullscreen 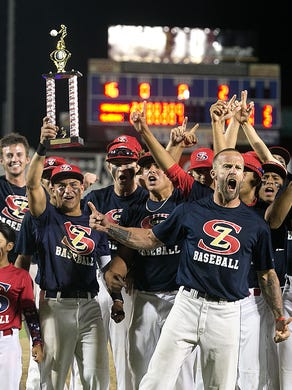 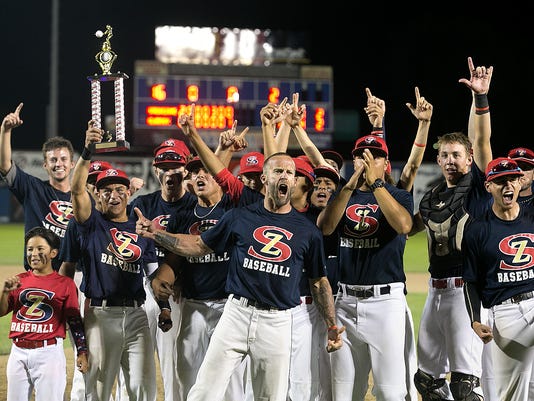 FARMINGTON — Strike Zone will once again represent Farmington as the host team for the Connie Mack World Series.

Strike Zone picked up two wins tonight to earn the honor, beating the Flat Bill Ducks 8-0 before rolling past the 4-Corners ClubSox 5-1 to claim the Connie Mack City Tournament championship at Ricketts Park.

After the win over the ClubSox, Strike Zone Adam Morrissey told his team it had delivered the best performance he had ever seen.

“It was incredible,” Morrissey said. “After losing on Tuesday, responding the way they did, coming back, putting their heads down and playing their greatest baseball at the end of the week, there’s nothing I can say about these kids. They’re absolutely incredible.”

Drew Gillespie got the win for Strike Zone, dominating the ClubSox along the way. In the complete-game win, Gillespie gave up five hits and two walks, and only allowed multiple baserunners in one inning.

“He has a presence about him. He wants the ball in his hand during big games,” Morrissey said of Gillespie. “He’s a big part of this team, and we didn’t want anyone out there for us but him. He did an incredible job.”

Strike Zone got to 4-Corners’ starting pitcher Mikey Hooper early, scoring two runs in the top of the first inning. After Lawrence Mayberry reached on an error and Gillespie doubled, Logan Klunder drove in the first run of the game with an RBI single. During the next at-bat, Kelton McCoy drove in Gillespie with an RBI single of his own.

In the bottom of the first, Kyle DeWees reached on an error to lead off the inning for 4-Corners, but the ClubSox couldn’t put anything together at the plate and stranded DeWees on first.

4-Corners’ struggles at the plate continued throughout the game, and ClubSox’s coach Brycen Campbell credited Gillespie’s performance for his team’s inability to string hits together.

“Gillespie was good, and he battled. He made pitches when he needed to,” Campbell said. “Our approach was fine, it’s just (Gillespie) had a better night than us.”

Strike Zone opened up the game in the top of the fifth. With two on and no outs, Klunder belted a 3-0 pitch for a home run, hitting the scoreboard in left-center to make it 5-0.

Morrissey gave Klunder the green light to swing on the 3-0 pitch, saying he had a good feeling that Klunder was going to do something big and went with his gut.

“I got the green light on 3-0. Coach said, ‘If you’re going to hit it, hit it out of the park,’” Klunder said. “I was going up there and focusing on hitting my pitch and being selective. It was a fast ball right down the middle. They laid it out on a platter for me.”

Klunder finished the game 3 for 4 at the plate with four RBIs.

The Sox tried to rally in the bottom of the seventh, getting a one-out triple from Taed Heydinger. Heydinger scored on the next at-bat with an RBI from Ben Tingen, but the play also resulted in a groundout for the second out of the inning.

The ClubSox went back to the top of the lineup hoping for magic from DeWees to keep their hopes alive, but DeWees hit a one-hopper to third base, where Strike Zone’s Zac Van Duran fielded the ball with ease and threw to first to end the game.

Campbell said the loss was disappointing, but the experience his players got this summer will have a large impact on them going forward.

“Those guys loved each other. They had a good time,” Campbell said of the ClubSox. “Now they have friendships forever. Winning is cool, but they’ll remember the friendships longer (than the loss).”

In the win over Flat Bill, Strike Zone came up with two runs in the first inning, getting RBIs from McCoy and Andrew Laymon.

The team added to its lead in the second. Gavin Martin led off the inning with a triple and later scored on a passed ball. Then, after Mayberry doubled, Gillespie singled down the third-base line to score Mayberry and make it 4-0.

Later in the inning, with two outs and the bases loaded, Van Duran doubled to the gap in left-center field. Two runs scored on the hit, then an error on the throw allowed a third run to score, making it 7-0.

The final run of the game came on a passed ball with the bases loaded that allowed Garrett Farmer to score from third.

McCoy got the win for Strike Zone, giving up just one hit in five innings.

The Ducks struggled to convert in the field and committed five errors in the game.

Strike Zone will have 13 days to get ready for its Connie Mack World Series opener, when the team will meet the West Regional winner, which is yet to be determined, on Friday, July 29.

“We’ll all keep the mindset we’ve had, which is, ‘Put in the work, work hard and it will come to you,’” Klunder said.