The 4-Corners ClubSox are on a roll.

Strike Zone's Drew Yazzie delivers a pitch Tuesday during a game against the the Club Sox at Ricketts Park in Farmington. Jon Austria/The Daily Times
Fullscreen

The Club Sox's Andrew Caliendo rounds third base to score a run against Strike Zone Tuesday during a game at Ricketts Park in Farmington. Jon Austria/The Daily Times
Fullscreen 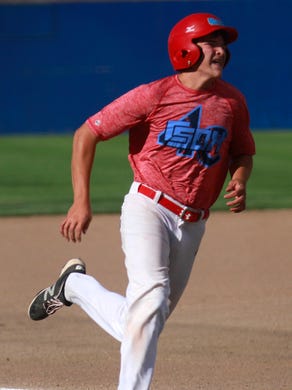 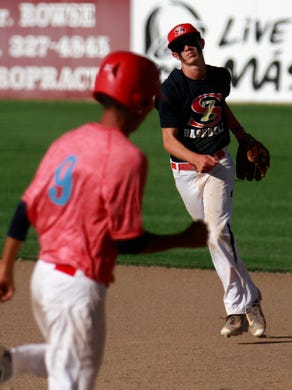 Strike Zone's Jake Taylor throws to Zac Van Duran at first base to get the out against ClubSox's Jeremy Griffith on July 5 at Ricketts Park in Farmington. Daily Times file photo
Fullscreen

FARMINGTON — The 4-Corners ClubSox are on a roll.

The Sox won their bracket at the High Desert Classic during the weekend in Albuquerque, then returned to Farmington and knocked off Strike Zone 8-3 this evening at Ricketts Park.

“We’re starting to play a lot better. Everyone on the team is starting to jell together, and they’re playing hard,” 4-C coach Brycen Campbell said. “We came up with good hits, and it's cool to have everybody feeling good.”

Strike Zone started the game well, as pitcher Drew Yazzie and his defense sat the ClubSox down in order during the top of the first inning, then scored two runs in the bottom of the inning to take an early lead.

But the advantage didn’t last long with Orlan Warren driving in two runs in the top of the second to pull 4-C even.

The ClubSox kept the runs coming in the third, fourth and fifth innings. In the third, 4-C scored two more runs on an RBI single from Mikey Hooper before Warren drove in another to make it 4-2. In the fourth, Miles Hitten drove in two runs with a two-out two-RBI double. Then, three batters later, with the bases loaded, Warren was hit by a pitch to bring in the third run of the inning. The Sox added their final run of the game in the fifth with an RBI single from Taed Heydinger.

The ClubSox finished the day with nine hits and drew seven walks to go with three hit batters.

“We didn’t throw enough strikes early, and that kind of set the tone for the rest of the game. It’s just one of those days,” Strike Zone coach Adam Morrissey said. “We’ve played so many games that you’re going to have days like this. We hit stuff hard, they caught it, and they found holes, so they won.”

Strike Zone had chances to cut into 4-C’s lead, but could never manage to get a ball to drop in the field to begin a rally. 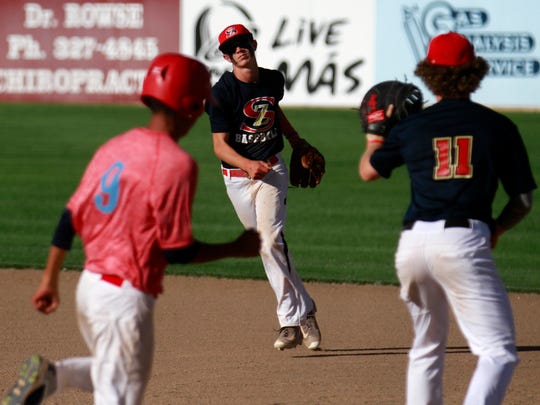 Strike Zone's Jake Taylor throws to Zac Van Duran at first base to get the out against ClubSox's Jeremy Griffith on July 5 at Ricketts Park in Farmington. (Photo: Daily Times file photo)

Strike Zone had the bases loaded with no outs in the fourth, but came away empty, hit into inning-ending double plays in the second and fifth, and left runners in scoring position in the sixth and seventh.

“We swung the bats well today, we just hit it right at them. Sometimes, that’s the way it goes,” Morrissey said.

Strike Zone’s third run of the game came in the sixth when Austin Ely scored on a 4-C error.

With the City Tournament set to begin on Monday, the two clubs turn their attention to fine tuning their play and keeping their players fresh for the week-long tourney.

“We’re practicing and making sure everyone stays sharp,” Campbell said. “We don’t know what the schedule is for the City Tournament yet, so we’ll map it out once it comes.”