The KC Storm picked up its first win of the Connie Mack City League season, holding off Naa’taanii 9-8.

FARMINGTON — The KC Storm picked up its first win of the Connie Mack City League season, holding off a seventh-inning rally from Naa’taanii to earn a 9-8 win Tuesday night at the Piedra Vista High School baseball field.

“Just to get our first win in Connie Mack is big for us. That plays into the idea of building at Kirtland Central, and this is just the first part of that,” Storm head coach Bryan Wardroup said. “To come out and get a win against Naa’taanii, who has a history of being successful in the league, is a huge win.”

The win was nearly squandered in the final inning, despite the Storm taking a 9-3 lead into the seventh.

After a pair of errors from the Storm, Cameron Phillips belted a two-run triple to spark Naa’taanii’s offense. Naa’taanii added two more runs and loaded the bases with two outs against the Storm’s relief pitcher Kesean Joe before head coach Bryan Wardroup moved Brock Beckstead from shortstop to the mound. 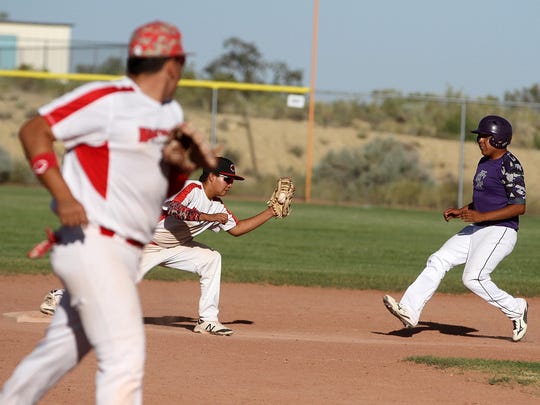 Naa'taanii's Dionte Yazzie records an out at second base after the Storm's Derek Curley attempted to steal on Tuesday at the Piedra Vista baseball field. (Photo: Steve Lewis/The Daily Times)

Beckstead said his eagerness to take the mound in the high-pressure situation came from a desire to redeem himself after committing one of the errors earlier in the inning.

Beckstead walked the first batter he faced, which pushed one run across to make it 9-8, but he struck out Naa’taanii’s leadoff batter, Tyler Quinn, to end the game.

The Storm dominated the first six innings of the game, scoring three runs in the first and third innings to take a commanding early lead while starting pitcher Derek Curley kept Naa’taanii guessing in the batter’s box. 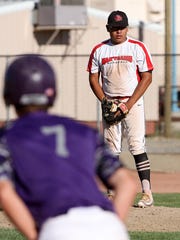 “I was really impressed with how Curley threw the ball today,” Wardroup said. “He threw five great innings for me, and I really questioned putting him back out there for the sixth inning. He was having so much success keeping guys off balance, but I looked at his pitch count and decided it wasn’t worth potentially blowing his arm out for the win today.”

Joe took over in the sixth inning with an effective performance before the mishaps and Phillips’ triple shifted the game in the seventh. But the adversity the Storm had to overcome before picking up the win was exactly what Wardoup has been looking for from his young team.

“To be honest, those are the situations in the past when I saw this team fold and completely implode," he said. "To see them persevere with the tying run on third base and find a way to get it done, that’s the growth in the team we are looking for.”