FARMINGTON – Defense has been Farmington strongest asset all season, and that was the case against Aztec Tuesday. 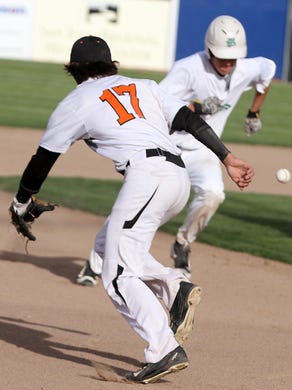 Aztec's Kyler Duggins throws to first base during a game against Farmington on Tuesday at Ricketts Park. Steve Lewis/The Daily Times
Fullscreen 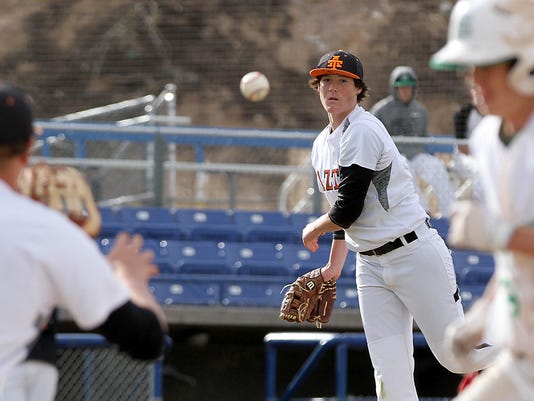 Aztec's Kyler Duggins throws to first base during a game against Farmington on Tuesday at Ricketts Park.(Photo: Steve Lewis/The Daily Times)Buy Photo

FARMINGTON – Defense has been the Farmington baseball team’s strongest asset all season, and that was certainly the case against Aztec Tuesday afternoon at Ricketts Park.

Time after time, the Scorps made great plays in the field while pitcher Keaton Christy kept the Tigers off balance en route to a 3-0 victory.

“That’s what we’re capable of doing, picking it up and throwing it across,” Farmington head coach Sean Trotter said. “Keaton Christy went out there and gutted it out. He ran out of gas a little bit at the end, but he gutted it out. He’s a competitor, and it was fun to watch. He did a great job.”

The Scorps looked poised for a big first inning after loading the bases with no outs. But Aztec’s Kyler Duggins struck out the fourth batter, then got Farmington to hit into a 6-4-3 double play to end the inning.

Aztec head coach Wes Laplatt said he thought Duggins pitched well, giving up only four hits the rest of the game. The junior lefty earned praise from Trotter, as well.

“You have to tip your cap to Duggins. He’s pretty dang good,” Trotter said. “He keeps the ball down and away, and changes speeds a little bit, and they played pretty good defense behind him.”

The bats were quiet for both teams through the first three innings.

In the top of the fourth, after retiring 11 consecutive batters, Christy showed his first sign of weakness. With two outs in the inning, Christy gave up a walk, then back-to-back singles to load the bases. But the junior got out of the  jam with a ground ball to third base, keeping the score 0-0.

Aztec (17-7, 5-2 District 1-5A) had another good scoring opportunity in the top of the fifth, getting Bradley Maestas on third base with one out, but again the Scorps (10-14, 4-2) got away unscathed. Aztec’s Jake Taylor hit a fly to center that Farmington’s Gavin Martin caught for the out. With Maestas tagging at third, Martin fired to the plate, with first baseman Dominic Martinez making the relay throw, to get the double play.

The Scorps carried the momentum from defense to offense, taking advantage of a couple of Aztec mistakes along the way to scoring three runs when Dominic Hines hit to left field and the ball rolled under the fielder’s glove.

“We made some mistakes defensively that really hurt us,” Laplatt said.

The Tigers also had a throwing error earlier in the inning that helped load the bases for Hines.

Aztec fought back in the top of the seventh, getting runners on first and second with no outs, but the Scorps made all the plays they needed to and got out of the inning. 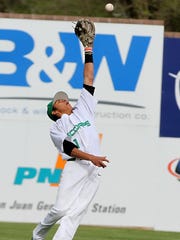 After the game, Laplatt said he was “pretty disappointed” with the outcome.

“We have to hold our emotion a lot better. That and things we’ve been working on all year, like hitting the outside fastball,” he said. “There’s no reason we shouldn’t have played better.”

Aztec will close out the regular season Thursday, traveling back to Farmington to take on Piedra Vista.

“We have to get through that one for the last game to mean anything at all. It’s a tough thing to do, to go down there,” Trotter said. “It’s going to be cold, and the wind is going to howl, but if we play to the best of our ability, we’ll be OK.”

The Panthers recorded just five hits on the day with Elijah Gamboa going 3 for 4 with a stolen base.

“We failed to get a bunt down four times, and every time we got guys to second or third, we popped up or struck out,” PV head coach Mike McGaha said.

McGaha added that the Panthers avoided pitches that would have hit the batters on at least three occasions with the batter recording an out later in the at-bat.

“He gave us his best and a chance to win,” McGaha said. “He will do it again before we are done.”

PV will be back in action Thursday, hosting Aztec.