Eric Stovall has been named the athletic director at Shiprock High School, making him the fourth AD in as many years. 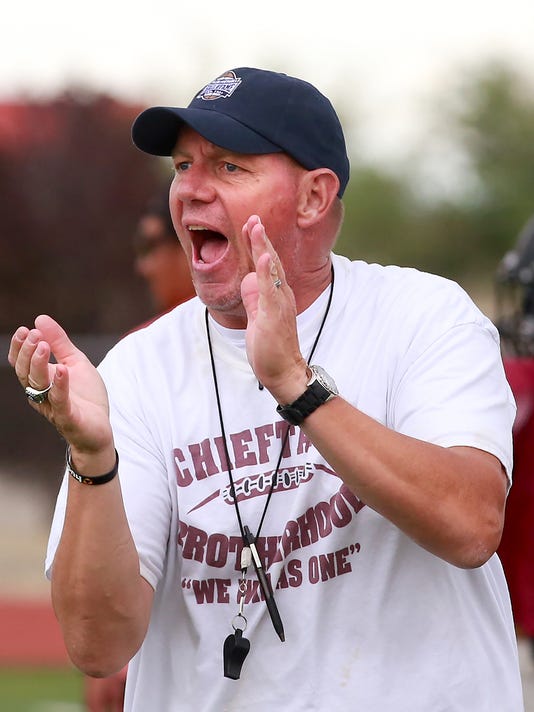 Eric Stovall coaches the Chieftains football team during practice on Aug. 18, 2016, at Shiprock High School. Stovall said will step down from his duties as the football coach, academic dean of students and athletic director effective May 31.(Photo: Daily Times file photo)

FARMINGTON — Eric Stovall has been named the athletic director at Shiprock High.

Stovall, who has been the head football coach at Shiprock the past two seasons, said retaining his coaching position in addition to being AD was essential to him taking on the new role.

"I made it very clear that in order to take over those duties and responsibilities, I want to continue working with our kids in the football program," Stovall said. "I think we have it going in the right direction, and that's a credit to the kids and coaches. I explained to the administrative team that in order for this to work, I have to be able to continue to work with my kids. That was important, and they were amicable to that."

Stovall has provided stability for the football program. He's 12-9 in his first two years and led the Chieftains to the District 1-4A title in 2016. He's the first coach to stay with the team for more than two seasons since Bruce Graham left after his third season in 2008.

“He's very experienced in athletics, both as a head and assistant coach. He's worked his way up and I'm hopeful he'll continue as Shiprock High for as long he wants.”

"He's been a leader both in the school system and outside it, and he does well," Tensay said. "He's been a football coach for a long time, so he understands both sides of it. He's very experienced in athletics, both as a head and assistant coach. He's worked his way up, and I'm hopeful he'll continue as Shiprock High for as long he wants."

Tensay added he is hopeful Stovall can provide a similar form of stability to the administrative position at Shiprock High.

Stovall is the fourth athletic director at the school in as many years and said providing some stability for the athletes, coaches and staff at Shiprock High is one of his goals.

"I think the biggest thing is trying to do things as positive as possible so we can continue to make Shiprock High one of the best schools in the county," Stovall said.

In keeping his role as football coach, Stovall said he'll lean on his assistant coaching staff to help take care of smaller details with the football team and help him find a good balance between coaching and administering.

Several coaches around the state, and in San Juan County, have taken on athletic director roles to go with head coaching positions.

Before leaving Kirtland Central after the 2014-15 school year, Kevin Graham served as KC's football coach and athletic director, and last year Rainy Crisp was named the AD at Navajo Prep while maintaining her head coaching positions for both the volleyball and girls basketball teams.

The Chieftains' first football game of the 2017 season will be Aug. 25, when they host Red Mesa, Ariz., at Chieftain Stadium.