Autumn Petersen leads the Aztec Lady Tigers with 23 goals, and her intensity has been a rallying point for the team.

As the coaches' selection for team captain, Autumn Petersen has changed the dynamics of the Aztec girls soccer team while leading the team with 23 goals this season

AZTEC — When the Aztec girls soccer team needed a spark during its match against Valencia in the first round of the 5A state tournament on Saturday, it was fitting that Autumn Petersen provided it.

Petersen, a junior forward for the Lady Tigers, found the back of the net twice in a matter of 30 seconds during the first half, creating separation between Aztec and Valencia in the elimination match the Lady Tigers went on to win 4-1.

Throughout the season, Petersen has been a constant for Aztec. She leads the team with 23 goals, and her intensity and aggressive play has often been a rallying point for the Lady Tigers.

Aztec coach Kelly Kelso said that earlier this season, when the Lady Tigers edged Los Alamos 1-0 in overtime for the Aztec Invitational title, it was Petersen’s intensity that pushed the Lady Tigers to fight back against the more physical Lady Hilltoppers.

“Los Alamos is very physical and when we played them last year at state our girls kind of bowed down to them, and that was kind of the case when we played them in the final of our tournament. But her intensity kind of picked everyone up," Kelso said. "It was like they decided, ‘Hey, we don’t have to take this.’"

That intensity was on full display in the second half against Valencia when Petersen came up with her third goal of the day. With about eight minutes left in the match, Petersen went up for a header and collided with Valencia’s keeper, earning a dead leg and a bloody nose for her successful effort. 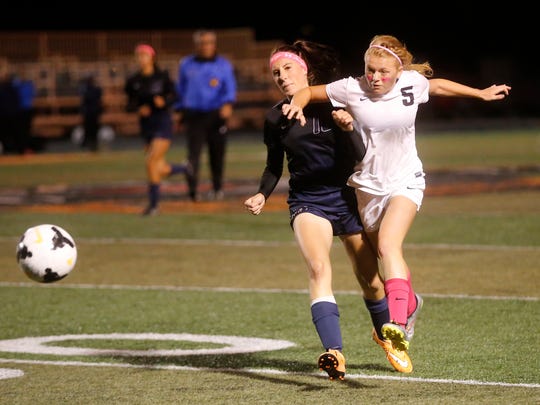 “Saturday in the second half when she got that header goal, when the ball was coming in, we knew she was going to put it away. She’ll sacrifice herself, and sometimes we don’t want her to go as gung-ho, but she makes things happen," Kelso said. "She’ll play all out until she can’t go anymore and sometimes we have to rein her in a little bit. But when we play the top teams in the state, Autumn plays at that level, and she inspires the rest of the team to play at that level.”

The way she inspires her teammates and pushes them to be the best is the main reason why Petersen was named a team captain this year.

“We’ve put her into a position that she wasn’t accustomed to being in, and she handled it better than I think anyone was expecting her to.”

The Lady Tigers have three team captains, two are voted to the positions by their teammates, the other, Petersen, was selected by the coaching staff.

Being the coaches’ pick for captain came as a surprise to Petersen, who initially had reservations about accepting the role but quickly took on the responsibility with the same intensity she plays with.

“I had to become a lot more focused,” Petersen said. “I knew (coach Kelso) was looking to me to be a role model for all the younger girls. I knew I’d have to stay focused and watch my actions a lot more because everyone was watching me.”

Serving as an example for the younger players on the team and bringing them into the mix has been Petersen’s greatest accomplishment as a captain.

In past years there was a separation between players on the team based on their grade. Seniors and juniors spent most of their time together, as did the sophomores and freshman. And the few eighth graders who were pulled up to play with the varsity team were relegated to the sideline, their main purpose  to hand out water to the rest of the team.

But Petersen didn't want to see that cycle continue.

“I think teams should be one big family, and when you leave people out you’re not all going to be connected. A few years back we had some team issues and I didn’t want it to be like that again,” Petersen said. “Now that I’m a captain, I wanted to bring the whole team together and help everyone get involved.”

With team chemistry and camaraderie at the highest level it has been in years, the Lady Tigers pose a serious threat to every team in the 5A tournament.

Aztec, the seventh seed, will meet No. 2 Albuquerque Academy in the quarterfinals on Thursday in Bernalillo. Kelso said that based on the matchup with the Lady Chargers, Petersen’s role on the field might vary from Saturday’s.

On Saturday against Valencia, Aztec looked for Petersen to be the goal scorer she has been all season. But against Academy, Kelso said he might look for her to be more of a set up artist, playing the ball ahead to her teammates for goals.

It would be a change for Petersen’s aggressive style of play, but she has proven over and over this season that she’s up to any challenge Kelso, the coaching staff or opponents can give her.

“We’ve put her into a position that she wasn’t accustomed to being in, and she handled it better than I think anyone was expecting her to,” Kelso said. “People are starting to look for her to be that spark.”

3. Do you have any pregame rituals?

"I used to always wear the same blue hair tie, but it broke when we played Farmington, so now I wear the same red hair tie every game."

"I don't know. Probably give some of it to family, donate some to charity and put some toward school."

6. Today's Halloween, so what was your favorite Halloween costume you wore as a kid?

"I have this baby picture of me when I was dressed as a pumpkin. I still have it to this day and I look at it a lot. So a pumpkin."

9. If you could go on vacation anywhere in the world, where would you go?

10. Who's your favorite superhero?