Logan Gallina on a power surge for the Renegades

Logan Gallina on a power surge for the Renegades

FARMINGTON — Logan Gallina is on a power surge from within the batter's box, fearless and determined to blast one over the wall.

“It’s a big energy jolt. It really gets you fired up when you’re running around the bases, for sure,” Gallina said. “Rhythm and timing’s the big thing… just letting my instincts work, not being afraid to swing and miss.”

Gallina keeps attacking pitches whenever they fall straight down the middle of the zone, ready to crush one out.

His first three-run bomb Monday against the Florida Legends broke that game open, while his second three-run shot against the Nashville Knights helped SoCal regain a lead for good.

“He’s probably the best player in the tournament so far,” coach Si Pettrow said. “He’s got a big swing. Even his outs are loud, which is great for us… Sooner or later, (opponents) miss a pitch and he hits that one. When he comes up, he’s very dangerous.”

A tough out for opposing pitchers, Gallina said his swing has an uppercut-type motion, which in turn creates more hang time and distance after making contact.

“I try to hit the ball hard. But with the way my swing is, I hit the ball in the air the majority of the time,” Gallina said.

And now that SoCal’s already secured a spot in Saturday’s CMWS championship series, Gallina is ready to keep doing damage when called upon.

“It’s an amazing feeling just to be able to pick up your team like that. It’s awesome in a situation like that,” Gallina said. “Whenever you get hot, you’re more confident. I’m very pleased with what I’ve been doing.” 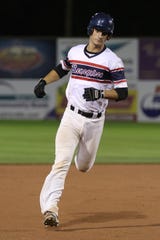 Logan Gallina of the Southern California Renegades runs across the diamond after crushing a three-run home run over the center field wall against the Nashville Knights during Thursday's Connie Mack World Series game at Ricketts Park in Farmington. (Photo: Curtis Ray Benally/Special to the Daily Times)

Despite losing perfect game after 4 innings and being 1 out away from no-hitter, Colton pitcher was masterful in Thursday’s 9-1 win over Phenom Texas. Farmington Daily Times