The East Cobb Yankees came back from a 12-1 deficit to eliminated D-BAT 17 from the Connie Mack World Series with a 17-14 victory.

East Cobb Yankees' Logan Simmons races past third base to score a run against D-BAT 17 during Game 10 of the Connie Mack World Series on Thursday at Ricketts Park. Jon Austria/The Daily Times
Fullscreen 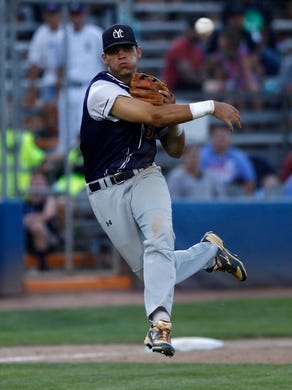 East Cobb third baseman Devin Warner throws to first base for an out against D-BAT 17 during Game 10 of the Connie Mack World Series on Thursday at Ricketts Park. Jon Austria/The Daily Times
Fullscreen

East Cobb Yankees' Logan Simmons races past third base to score a run against D-BAT 17 during Game 10 of the Connie Mack World Series on Thursday at Ricketts Park.(Photo: Jon Austria/The Daily Times)Buy Photo

FARMINGTON — Fans at Ricketts Park needed a calculator to keep track of the runs, hits and errors the East Cobb Yankees and D-BAT 17 combined for in Game 10 of the Connie Mack World Series.

East Cobb and D-BAT combined for 31 runs on 29 hits and five errors with the Yankees prevailing 17-14 tonight at Ricketts.

The game appeared to be over in the third inning when D-BAT score 11 runs in the top of the inning to take a 12-1 lead. But the Yankees never relented, scoring one run in the bottom of the third, then five in the fourth, and seven in the fifth to take the lead.

"I've got to give the credit to (the players). They kind of got together in front of the dugout and decided that if they were going to go down they were going to go down swinging," East Cobb coach James Beavers said. "We tried to keep them as even keel as we could. To come back from down 11 runs doesn't happen very much in baseball — you have to have some luck, some great at-bats and a pitcher like Jordan (Ward)."

Ward entered the game in the fifth inning and gave up one hit in three innings of work to earn the win for the Yankees.

"We weren't hanging our heads — we stayed in it,' Matthews said. "It was just a battle of the sticks. (The Yankees) did their job, we did our job, they just came out on top."

Billy Zinnershine and Jason Rooks led the Yankees with three RBIs each.

The loss eliminated D-BAT 17 from the series while East Cobb advanced to the final five of the bracket. The Yankees will play D-BAT Elite in an elimination game at 5:15 Friday at Ricketts. 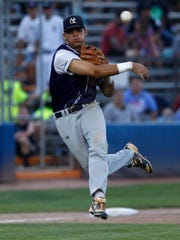 East Cobb third baseman Devin Warner throws to first base for an out against D-BAT 17 during Game 10 of the Connie Mack World Series on Thursday at Ricketts Park. (Photo: Jon Austria/The Daily Times)

Beavers said he wants to see the Yankees play with the same kind of enthusiasm they had in the final four innings of today's win.

"We had good at-bats. I don't think we swung at many bad pitches or made many bad outs, and we didn't give away any outs," Beavers said. "We played hard and made some great defensive plays. I want us to come out and do the same thing. Hopefully, we'll find a pitcher who will give us a good effort."