East Cobb's Logan Simmons flips the ball to second base to complete an out against the Nashville Knights Tuesday during Game 3 of the Connie Mack World Series at Ricketts Park in Farmington. Jon Austria/The Daily Times
Fullscreen 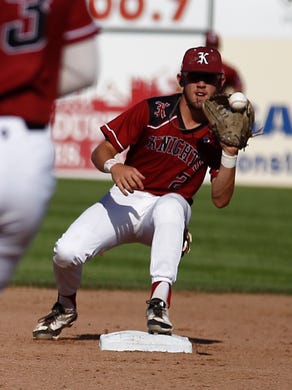 Nashville's Thomas Zazzaro fields a throw at second base for an out against the East Cobb Yankees Tuesday during Game 3 of the Connie Mack World Series at Ricketts Park in Farmington. Jon Austria/The Daily Times
Fullscreen

Case in point — their 11-5 CMWS Game 3 win over the Nashville Knights tonight at Ricketts Park.

"We love that. That just starts everything," Yankees coach James Beavers said with a big grin on his face. "Every time we get a walk or hit by a pitch, we've got a chance to move some runners up."

It began with a couple walks and a hit-by-pitch. The Yanks soon began moving runners along the base paths via numerous singles, as well as the occasional fielding error and wild throws.

They eventually drove in runs with deeper shots to the corners and to the wall.

“We just wanted to try and stay on it, keep moving runners around,” Beavers said.

East Cobb built an 8-0 lead through the middle of the third inning. 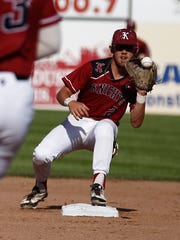 Nashville's Thomas Zazzaro fields a throw at second base for an out against the East Cobb Yankees Tuesday during Game 3 of the Connie Mack World Series at Ricketts Park in Farmington. (Photo: Jon Austria/The Daily Times)

Nashville made things interesting in the bottom of the third inning with a few hits to the corners, but John MacCauley’s ground-out chopper to second base ended that surge.

They got another run on the board in the bottom of the sixth, but Jonathan Giles struck out swinging with the bases loaded and with two outs.

“When you don’t capitalize in those situations, then you really feel like you’re playing from behind the whole time,” Knights coach Eric Fruechtmeyer said. “I think a few of us were a little overwhelmed with the surroundings and the moment.”

The Yankees will face the Danville Hoots at 5:15 p.m. Wednesday, while the Knights look to bounce back facing the SoCal Renegades at noon Wednesday.