The Midland Redskins dominated the host team 4-C ClubSox in a 9-1 win tonight at Ricketts Park.

The Midland Redskins' Damon Dues reacts after hitting a triple against the 4-C ClubSox during Game 1 of the Connie Mack World Series on Tuesday at Ricketts Park. Jon Austria/The Daily Times
Fullscreen 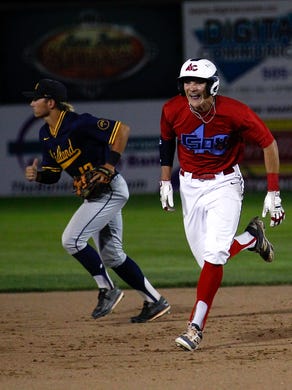 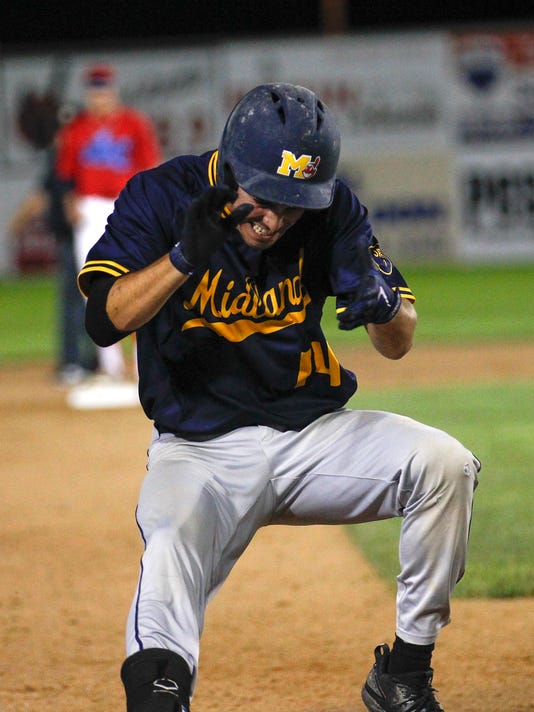 The Midland Redskins' Damon Dues reacts after hitting a triple against the 4-C ClubSox during Game 1 of the Connie Mack World Series on Tuesday at Ricketts Park.(Photo: Jon Austria/The Daily Times)Buy Photo

FARMINGTON — The 4-C ClubSox didn't have it on the mound, and Midland made them pay.

The Redskins piled up seven hits, spraying the ball all over the field on their way to a 9-1 run-rule victory over the host team in Game 1 of the Connie Mack World Series tonight at Ricketts Park.

4-C coach Mike McGaha said the ClubSox simply didn't pitch well for most of the game, adding that the nerves of playing in front of the capacity crowd at Ricketts probably got to some of the players.

"I think some guys (struggled with nerves), and some guys didn't. I think there were some really good plays defensively," McGaha said. "I think you could tell. You could look out on the field and see the guys the game wasn't bigger than, and you could sense the guys nervous from the dream of playing in the Connie Mack World Series and in front of the home crowd."

The night could be summed up by Midland's third at-bat. Midland's Luke Waddell hit a fly ball to center field, but 4-C centerfielder Sam Moody misread the ball, and Waddell ended up with an RBI triple.

Midland got production from the top to the bottom of the lineup and scored runs in each of the five innings.

"We got a little bit from everybody tonight. I think everybody in the lineup got a hit," Midland coach Dave Evans said. "When you get something from everybody, you're going to be successful."

Ben Dragani earned the win for the Redskins after pitching all five innings and giving up just four hits.

Waddell finished the night with two RBIs, while Cal Conley, Nick Jodway and Damon Dues added an RBI each.

The ClubSox did get some positives to build from in the fifth inning. 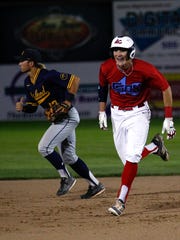 Aztec product Kyler Duggins entered the game in the top of the fifth inning and struck out the two batters he faced. Then, in the bottom of the frame, Piedra Vista graduate Devin Ferrari hit a leadoff single, followed by a double from Nate Swarts to put runners on second and third for Cody McGaha. McGaha drove in Ferrari with a ground ball.

The win moves Midland into a second-round game against D-BAT 17, which drew a bye into the second round. The two teams will meet at 5:30 Wednesday at Ricketts Park.

4-C will face D-BAT Elite in an elimination game scheduled for Wednesday at 7:30 at Ricketts.