Marquise Glenn, Parker DePasquale and Emilio Lovato learned to not grow complacent down the stretch, look to lift Farmington to second SMWS title.

FARMINGTON — Marquise Glenn, Parker DePasquale and Emilio Lovato were quick to enjoy the Frackers’ blowout victories in 2018, but learned just as quickly to not take foes for granted.

“Maybe we got used to beating teams during the season,” Glenn said.

Farmington was so accustomed to putting up giant numbers, players were convinced they’d plow their way to back-to-back Stan Musial World Series titles.

Instead, Farmington got off to a rough start in pool play and exited early.

“We thought we were going to go up there and absolutely destroy people, but we found out that you’ve got to still play to your potential,” Lovato said. 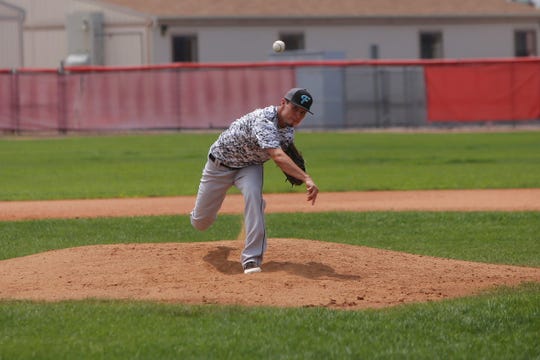 Emilio Lovato of the Farmington Frackers fires a pitch against the Maryland Monsters during a Stan Musial World Series semifinals game on Saturday, July 28, 2018, at Brighton High School in Brighton, Colo. Lovato is among several players back for 2019. (Photo: Matt Hollinshead/The Daily Times)

Glenn, DePasquale and Lovato, the lone returners from last year, certainly don’t want to see that opportunity go to waste.

And like 2018, Farmington will have to travel northeast again into Colorado for the 2019 SMWS.

So, Glenn, DePasquale and Lovato will keep their guard up start to end.

“I think us three learned a lot from that tournament about getting complacent,” DePasquale said. “When you think you’re just going to win it all, it’s not going to happen. You’ve got to keep working, you’ve keep doing the same things that made you successful all year.”

Farmington, which will open the new year against the Boulder Collegians at 7 p.m. Thursday at Ricketts Park, will again feature plenty of offensive firepower, including players like Cameron Stevenson, Cedric Reynaud and Gavin Mestas.

The Frackers’ pitching staff will be much deeper, particularly with right-handed relievers.