Felix signs with Ranger College in Texas for rodeo

Felix signs with Ranger College in Texas for rodeo

BLOOMFIELD — Nick Felix III will journey to Ranger, Texas, later this summer to begin the next chapter of his rodeo career at Ranger College after signing his national letter of intent with the school at Bloomfield High School today.

The recent BHS graduate found a place to continue competing in the sport he loves after getting in contact with Llew Rust, who coaches rodeo at the Texas community college, earlier this year.

"One of my buddies who I've rodeod with for a while, he's going to school down there, and he helped me talk to the coach," Felix said. "I figured I may as well go down there where a good coach is."

Since he was just 8 years old, Felix has been team roping with friends, and as a freshman at Bloomfield, he picked up calf roping. He'll participate in both events as a member of the Rangers at the next level.

From the day he first grabbed a rope, Felix has had a stellar support system behind him. Fellow New Mexico rodeo contestants Garrett Jacobs and Sterling Cowdrey, as well as Malachi Pablo, another recent Bloomfield grad who competes in rodeo, have helped him hone his craft.

"They're just always pushing me to do better than I have done," Felix said. "I've always needed that."

“If he picks up a ball, he's good at it. In eighth grade, whether that was baseball, basketball, football, he could get out there and do it. But his love wasn't there. I saw a different athlete watching him get on that horse and rope.”

Christian Sanchez, a semi-pro calf roper from Grants who won a New Mexico Rodeo Association Finals championship in the event in 2012, has volunteered his time to coach the former Bobcat, who said he was "just a baby in the sport" before Sanchez got a hold of him. And though there was no rodeo coach at Bloomfield during Felix's tenure with the school, coaches and teachers like Frank DeHoyos have also helped mold Felix into the competitor he is today.

DeHoyos has been around Felix for years. The longtime baseball coach of the Bobcats, who also serves as Bloomfield's weight training and physical education teacher, said hard work has defined Felix to this point of his rodeo career.

"The best part about him is his work ethic. And he's kind of modest, but he gets that from his family," DeHoyos said. "His whole family works their tail off, and he just does what it takes to get better."

Felix didn't play any other sports in high school, but according to DeHoyos, that's not because he wasn't good enough. 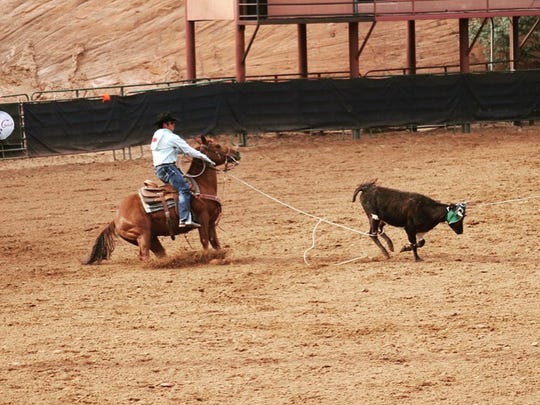 Nick Felix III competes in the New Mexico High School Rodeo State Finals in Gallup on May 28. At the event, Felix and his partner won the round of team roping with a time of 6.3 seconds. (Photo: Courtesy of Andrea Felix)

"If he picks up a ball, he's good at it. In eighth grade, whether that was baseball, basketball, football, he could get out there and do it. But his love wasn't there," DeHoyos said. "I saw a different athlete watching him get on that horse and rope."

Felix's numerous rodeo accomplishments over the past two years have put him on Rust's radar. Felix made the short round at the Best of the Best event in 2015, an annual high school competition held in Gallup. He's also won a few averages at high school rodeos in team roping this year.

From July 10-15, Felix will represent New Mexico at the International Finals Youth Rodeo in Shawnee, Okla.

Felix said he can't wait to get going as a member of the Rangers, who are a member of Region 5 of the National Junior College Athletic Association. He said rodeo has been a monumental part of his life — so much so that he can't imagine life without it.

"Rodeo's been like the biggest thing that's happened to me. I don't even know how to explain it, it's just been that good to me," he said. "Just being around all your friends every weekend, it's like family oriented, and that's really cool."