Navajo Prep and Thoreau went to battle Friday night at the Eagles Nest, and Prep came away with a 46-34 win. 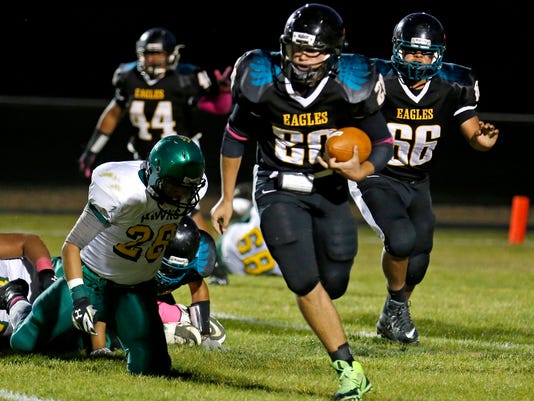 Navajo Prep's Jake Rogers breaks away from a tackle during a game against Thoreau on Oct. 2 at Eagle Stadium in Farmington.(Photo: Daily Times file photo)

FARMINGTON — The Navajo Prep and Thoreau football teams went to battle Friday night at the Eagles Nest, and Prep came away with a hard-fought 46-34 win.

“It was a back-and-forth game,” Prep head coach Storm Tallbull said. “Thoreau’s really good. I have to give a lot of credit to coach (Roger) Willie and his coaching staff. Their program is really starting to come up. I could tell they’ve put a lot of work in for those kids.”

Tallbull said there were times in the game when he and his coaching staff had to motivate the Eagles, but every time Prep needed a big play, the team came through.

The Eagles (2-3) tried to run the ball to start the game, but Thoreau’s defense stuffed the running game time and again.

“At halftime, we fixed some things, and after that, we threw the ball well,” Tallbull said. “(Quarterback) Dakota Halliburton had a great game. He was poised and under control. He saw the routes and was a great leader for us.”

Thoreau (3-2) did a good job of mixing up its play calling, which came as a bit of a surprise to the Eagles.

“Defensively, we knew they were going to be a heavy run team, so we wanted to stop the run. But they also threw the ball well. They had some passing plays we hadn’t seen before,” Tallbull said.

With the Hawks finding success through the air, Prep was forced to make some adjustments to get pressure on the Thoreau quarterback to take him out of rhythm to help secure the win.

Prep has its bye next week and won’t be back on the field until Oct. 17, when the Eagles host Dexter (3-2).

Tallbull said the main focus in the extra time off will be execution and getting healthy.

“I don’t think any team in New Mexico doesn’t have players who are banged up,” Tallbull said. “We want to take care of the boys and get them healthy, but we also need to work on our execution.”