SHIPROCK — On its home course in front of its fans, the Shiprock girls cross-country team put on a show... 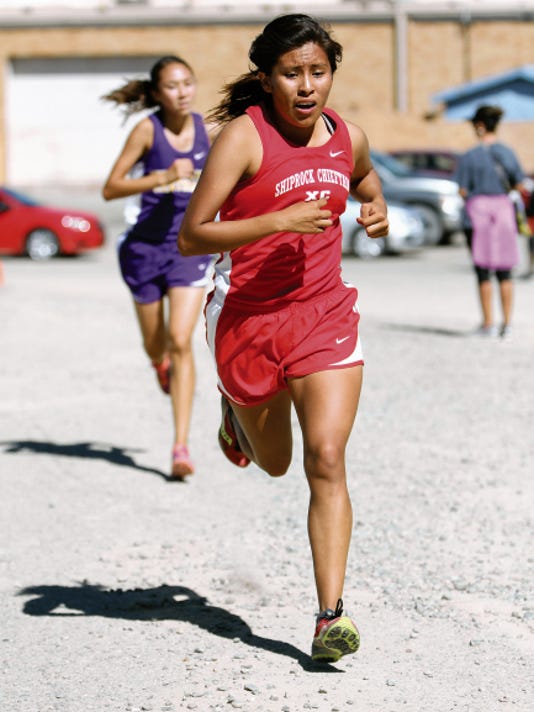 Shiprock's Lacey Howe leads LaKyla Yazzie of Kirtland Central into the final leg of the Shiprock Invitational on Saturday. Howe placed third with the time of 19:56.04, and Yazzie placed fourth with the time of 20:13.45.(Photo: Curtis Ray Benally &#8212; Special to The Daily Times)

SHIPROCK — On its home course in front of its fans, the Shiprock girls cross-country team put on a show Saturday morning at Chieftain Stadium.

The Lady Chieftains were by far the best of the 13 units at the Shiprock Invitational, finishing with a first-place score of 29 points. The closest team to Shiprock was Window Rock with 82.

"It's always good to win our home meet, and that's one of the goals we set before the season started," Shiprock coach Alice Kinlichee said. "Everybody did their part today."

The Shiprock boys managed sixth place out of 17 teams. Chieftains coach Brian Paniagua said he was a little disappointed with that placing.

"I was hoping for better today," he said. "We had a couple guys fall off the back, and they didn't get back into it. That kind of cost us a little bit."

As they have been for the rest of the season, Aaron Lee (23rd) and Aaron Gould (27th) were Shiprock's top finishers.

After winning the Miyamura meet last week, Kirtland Central's boys had another impressive outing, taking second out of 17 teams with a score of 124 points. Chinle was head and shoulders better than the competition Saturday, winning first place with 35 points.

KC's Kashon Harrison continued making his case for the top runner in District 1-4A by winning first place in the boys 5K run. His time was 16 minutes and 11 seconds, nearly four full seconds better than the next-best runner.

"I missed a track mark, and I had to catch up to the (Chinle) runner who was ahead of me," Harrison said. "After I passed him, I went uphill and started using my kick between the 200- and 300-meter mark."

Harrison said mental strength kept him focused toward the end of the 5k. His teammate Aaron Bunny took 13th.

"This is the first meet where the girls were fully healthy," KC coach Lenny Esson said. "The girls aren't as deep as the boys, but we kind of got a preview of what we'll be working with at full strength."

"Both teams did really well," Sage said. "We're still trying to figure out who we are and where we are, and today was a really good indicator."

The Aztec girls ran well on Saturday, placing fifth with 145 points, led by Ashlynn Atwood and Naomi Teasyatwho, who ended up in 18th and 22nd, respectively.

"I know for a fact that Naomi and Ashlynn ran their best time ever," Lady Tigers coach Steve Lanier said. "So we're pretty tickled with them."

Aztec's Dwight Barton snagged 21st in the boys 5k, and Andrew Day was 25th. The boys placed ninth as a team.

The Prep boys ran to a 10th-place finish. Quencavies Dodge finished just inside the top 30 boys at 29th.

"Today was a good day," McDonald said. "I think the times and how good the kids felt made it a good day. I want to get the kids into shape, keep them injury free and work on their times, and we did all of that today. Just about everyone (had a personal record)."

Farmington's boys wound up eighth, while the girls took ninth.

Leading the way for the boys were Danny Hickman and Tanin McDermott, who finished in 14th and 17th, respectively. For the girls — who were without top runner McKinzey Allee — it was Anastasia Wilkinson (15th) and Melina McDermott (16th) who fueled Farmington.

"McKinzey's been our fastest runner at the previous meets, but she had a family function she had to attend today," Lady Scorpions coach Kevin Deswood said. "Anastasia and Melina ran well, finishing just three seconds apart, and I think most of my boys PR'd today."

"We had a lot of PRs today," he said. "Morgan Ortiz and Donovan Begay finished four minutes better than they did at this same race last year."

Only two of the seven Lady Bobcat runners could make the Shiprock meet. They ran the junior varsity races.