FARMINGTON — The Bloomfield girls soccer team has now strung together two solid outings in a row after... 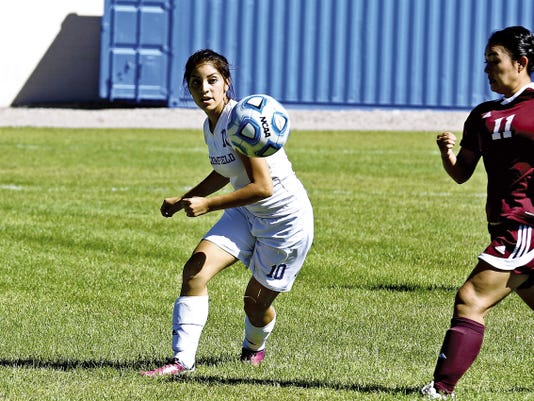 FARMINGTON — The Bloomfield girls soccer team has now strung together two solid outings in a row after hammering Rehoboth Christian 8-2 at home on Thursday.

Elicia Griego and Teagan Mosley had a field day. Griego scored four goals and Mosley chipped in with a hat trick. Mercedes Flores added another score.

Fresh off a 6-0 win against Navajo Prep on Tuesday, coach Shannon Nygren said her team did a good job in transition against the Lynx.

"The girls played very aggressive with the ball and have made improvements transitioning from defense to offense," she said.

Bloomfield (3-6) will get to rest over the weekend before visiting Kirtland Central (5-5) at 4 p.m. Tuesday.

Sandia Prep is always a tough matchup in girls soccer, and Kirtland Central found that out first hand Thursday afternoon.

The Lady Broncos struggled on the road, which has been a pattern for them this year, and wound up losing 10-0 to the Lady Sundevils.

The 10th goal was scored inside the game's final eight minutes, which ended the contest a bit early.

"We always seem to struggle in away games," KC coach Chad Kimball said via text message. "I'm telling the girls that it's all about clicking together at the right time to make a run at state. We're really looking forward to bouncing back against Bloomfield."

Goals were tough to come by for the Navajo Prep girls soccer team Thursday, just as they have been for much of the 2015 season.

"Overall, the girls did not give up easy goals," Nelson said in a text message. "The last 15 minutes of the second half was good for us, we were very aggressive and we maintained offensive possession."

Senior Darien Nelson scored Prep's only goal on a strike from 30 yards out.

For the fourth time this month, the Bloomfield boys soccer team (5-7) lost a heartbreaking one-goal game to a top opponent.

Thursday night at home, it was Rehoboth Christian (8-1) that edged the Bobcats 2-1.

"It was a real exciting game. We were doing a good job of getting some good opportunities in the second half, just kicking the ball around and possessing," Bloomfield coach Scott Reid said. "The goal that we let in to lose the game was just one of those tough ones."

Tied late in the second half, a Rehoboth attacker booted a ball from 18 yards away that a Bloomfield center defender stuck a foot out to block. Unfortunately for the Bobcats, he deflected the ball into his own goal for what would be the game-winning score for the Lynx.

"It was one of those ones where I know he felt bad, but that happens in soccer," Reid said. "If his foot doesn't touch it, and it doesn't go in who knows what happens after that?"

Bloomfield will get a shot at redemption when it visits Rehoboth on Tuesday, Sept. 29. Before that, the Bobcats will travel to Pojoaque Valley (0-5) for a 1 p.m. game on Saturday, Sept. 26.

"For some reason, we always start a little slow, and we struggle with our passing. But the girls stepped it up in the middle of the first set and carried that momentum into the second and thirds sets," Prep head coach Rainy Crisp said.

Setter Jasmine Benally finished the night with 25 assists, most of which went to Jasmine Coleman and LeShauntai Adams, who recorded 11 and 10 kills, respectively.

"We're so versatile this year we don't have to rely on Coleman to get us points. We're so solid on our front line, teams need to watch out for everyone," Crisp said.

Crisp said the Lady Eagles are starting to play better on defense, but she is looking for her team to become more consistent.

Prep will have ample time to work on the things it needs to improve with a week off before the team travels to Dulce on Thursday to play the Lady Hawks. The two teams met earlier this month with Prep winning in straight sets.

"We played them tough," Aztec head coach Anna Strauss said. "We played well. We're a young team, and there are going to be some bumps, but the chemistry was a lot better tonight. I saw a lot of improvement tonight all the way around."

Strauss said Bayfield had a couple of girls whose serves the Lady Tigers had trouble handling.