FARMINGTON — With less than three minutes in the third quarter of Friday night's showdown against Goddard, a... 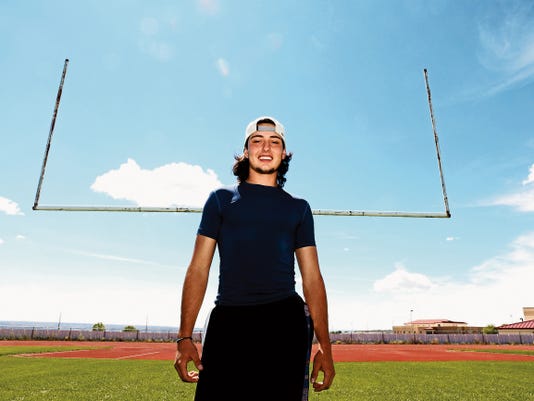 Junior running back and safety Alex Shay stands for a photo Monday on the football practice fields at Piedra Vista High School in Farmington.(Photo: Alexa Rogals &#8212; The Daily Times)Buy Photo

FARMINGTON — With less than three minutes in the third quarter of Friday night's showdown against Goddard, a perennial football powerhouse, Piedra Vista's Alex Shay made the biggest play of his high school career.

The Rockets, then ranked No. 3 in 5A, were chipping away at the Panthers' lead, which stretched to 20 points at one time.

After scoring a touchdown to cut down PV's lead to only 7 in the third quarter, Goddard's quarterback threw a deep pass, and Shay intercepted it.

The junior safety returned the ball to the Goddard 1-yard line, where the Panthers capitalized with a touchdown less than a minute later. After the momentum-shifting interception, Goddard didn't get out of a double-digit deficit for the rest of the night, and the Panthers went on to win 34-16 at Hutchison Stadium.

"(Goddard quarterback Cameron Stephenson) I noticed throughout the game would pick one side of the field to throw to, and his eyes would stay locked on that side," Shay said of the play, pre-snap. "Since they were losing but had a little bit of momentum, I assumed they would try something deep. So I dropped way back when they snapped it."

PV senior cornerback Mike Gonzales covered the receiver who Shay correctly predicted Goddard would throw to, so Shay found himself in good position to make a play.

"I look over, and Mike's got nice coverage, so all I do is run over behind them and reach for it, because it was overthrown," Shay said. "I was hoping to get all the way into the end zone with it, but it was still big. And Mike's coverage was the reason it was overthrown."

It's not uncommon for Shay to share the spotlight with a teammate.

"He's very loyal to his friends," said PV football head coach Jared Howell. "I think he would run through a wall for his friends and his teammates. That's the kind of kid he is."

Howell, who has been the Panthers head coach since 2000, acknowledged Shay's third-quarter interception was the game's turning point.

"Every game usually has a few pivotal moments, and that was a big one, because Goddard had scored twice in a row and was driving to make it three in a row," he said. "That interception and then Alex returning it all the way back really swung the momentum back in our direction."

Growing up, Shay spent the majority of his time at quarterback, but he now plays running back, in addition to safety. And, naturally, he credits his teammates for helping him transition successfully.

"I think I've improved because of my teammates. If they didn't go as hard as they did in practice and push me, I don't think I'd be where I'm at," he said. "In the weight room, they push me. As a freshman, I didn't work as hard. I just relied on my athleticism. Now, I feel like I got guys who push me to be better, and I can't let them down."

Still, Shay — a two-sport athlete who also plays basketball — has plenty of athleticism. He said he applies the skills needed to be successful on the basketball court to the football field, and vice versa.

"Basketball helps me out with being agile," Shay said. "Running back-wise, it helps me dodge tacklers and still stay on my feet moving forward. My hands are improved because of it, too. I have to rebound, and being a running back, that helps me catch the ball better, I think."

Howell said Shay's athleticism has made him a versatile asset to the PV football team.

"Alex has always been a really good athlete. He does a lot of things naturally well," Howell said. "He can play cornerback, he can play linebacker. He can probably play several positions on both sides of the ball. That's just the kind of ability he has."

Shay said improving his speed is at the top of his goals as a player. And, he said, he has high expectations for both himself and the team.

"I wanna get bigger, stronger and faster as a player by the time I graduate," he said. "As a team, I really think we can win state by my senior year. Hopefully, we can grab it this year."

Now 2-0 and ranked 10th in the state, the Panthers have surprised a lot of people, but not Shay. Flying high off the statement win against Goddard, Shay said "the sky's the limit" for the Panthers this season.

"Even before we won last week, we've been telling each other we're going to win state this year," he said. "You have to have the mind-set that you can do it. We believe in our coaches and what they have to say."

As thrilling as last week's win was for Shay and his teammates, it will be back to the grind this week as the Panthers prepare to play another undefeated team, the Durango Demons, on Friday night in Durango, Colo.

"Buy myself a nice car."

"I go and talk to my family for about 20 minutes before each game, about the game."