FARMINGTON — The Piedra Vista football team will have its hands full as the Panthers try to stay undefeated,... 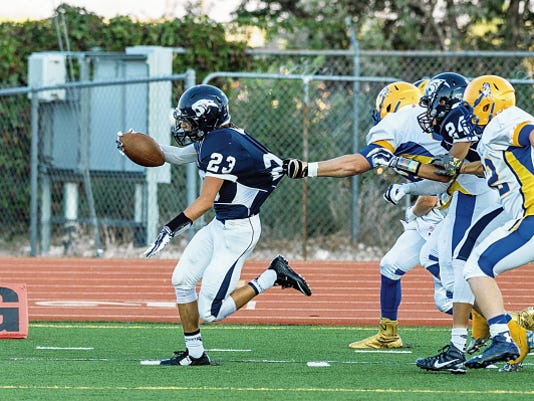 FARMINGTON — The Piedra Vista football team will have its hands full as the Panthers try to stay undefeated, hosting perennial power Goddard tonight at 7 at Hutchison Stadium.

"A win would be beating one of the state's top-notch programs. Goddard is a quintessential football team," PV head coach Jared Howell said. "They're tough, physical and get after you play after play. They're the team you think of when you think about football."

The two teams met last season in Roswell, with the Rockets shutting out the Panthers 47-0.

Gamboa was more than adequate in the win, throwing for two touchdowns and picking up key first downs on the ground when flushed from the pocket. Howell said Gamboa will start at quarterback again this week.

Last week, the Panthers relied on their potent running game to control the clock against San Juan. Howell said his team will need to be balanced on offense this week, knowing Goddard will be keying on stopping the run after giving up 308 yards on the ground against Clovis.

"We'll have to be balanced in our attack. They're going to stack the box against us, so we'll have to throw the ball, too," Howell said. "We're going to take what they give us and go from there."

Defensively, the Panthers will be tasked with limiting the Rockets' power running game, an attack that has beaten up and worn down opponents in the past.

"They're definitely a team with a heavy run game, but there a run team that can also pass, and a lot of people forget about that," Howell said.

Howell said the last week of preparation for Goddard has been the same as every other week.

"It doesn't really change from week to week depending on who we play," Howell said of the game plan. "We need to control what we can control. We can't control what coach (Mike) Whalen and Goddard are going to do or how they line up. We can only control what we do and how we line up and play."

Before the district realignment in 2014, KCHS and FHS battled it out yearly as 1-4A rivals. The Scorps have not lost the matchup since 2008.

Another storyline surrounding tonight's matchup revolves around the head coaches - FHS' Jeff Dalton and KCHS' Greg Jenks. The two coached together on Farmington's staff under Gary Bradley prior to this season.

For KCHS, the game will be about putting last week's 43-0 thrashing at the hands of Bayfield, Colo., behind it. Missed opportunities on the Broncos' part snowballed until the game was well out of their reach.

FHS, meanwhile, is riding high off a 15-14 comeback victory over Los Lunas on the road last week. The Scorpions scored a touchdown with only 55 seconds left to steal the win.

After suffering a 48-28 loss to Bloomfield last week, the Aztec Tigers (0-1) will try to bounce back on the road when they meet the Durango Demons (1-0) in Durango, Colo.

The Demons beat up on Lutheran High, from Parker, Colo., 33-7 in their opener.

After falling behind 7-0 in the first quarter, Durango reeled off 33 unaswered points in the second and third quarters behind a strong running game from senior Lawrence Mayberry. Mayberry finished the game with 10 carries for 121 yards and two touchdowns.

Durango's strong ground game could spell trouble for Aztec after the Tigers were gutted for 406 yards on the ground a week ago.

Aztec was able to get its spread attack going against Bloomfield in the loss, totaling 440 yards of offense, but as the game wore on, the Tigers, who were working with a 13-man rotation, couldn't keep up the pace as the game continued.

Fresh off an impressive 48-28 home win against Aztec in Week 1, Bloomfield will hit the road to take on 0-1 Pojoaque Valley tonight.

The Bobcats' rushing attack lit the Tigers up last week to the tune of 406 yards on the ground. Chauncey White and JD Robinson accounted for 277 of those yards and tallied five total touchdowns.

Pojoaque Valley, which is roughly a three-hour drive from Bloomfield, lost its season opener 19-16 at home to Los Alamos, which is a combined 6-15 since the start of the 2013 season.

Despite graduating more than 20 seniors in the spring, Bloomfield looked sharp in its season-opening win. Sophomore Brendon Charley managed the game well from the quarterback position for the Bobcats. He went 6 for 13 for 57 yards, a touchdown pass and no interceptions against Aztec.

Navajo Prep (0-0) had an unusual start to the 2015 season, coming away from its season opener with a no-decision after multiple lightning delays stopped the game against Laguna Acoma in the second quarter.

Navajo Prep, ranked No. 13 in 3A, will now face a daunting task, as the Eagles look for their first win of the season, traveling to Estancia to take on the top-ranked Bears (1-0) tonight at 7.

Last week the Bears held off Lovington 32-27 while picking up 271 yards and three touchdowns on the ground.

It will be the Eagles' second straight week of facing a formidable running attack. Prep did a good job of limiting Laguna Acoma's normally dominant running game during the first half of last week's game.

Prep started slow offensively, but after working out the first-game nerves, the Eagles' pass-heavy attack began to move the ball in the second quarter.

Karl Schneider is the sports editor for The Daily Times. He can be reached at 505-564-4648 and kschneider@daily-times.com. Follow him @karltschneider on Twitter.