BLOOMFIELD — Racking up individual statistics has never been a problem for Bloomfield's Edgar Fonseca. 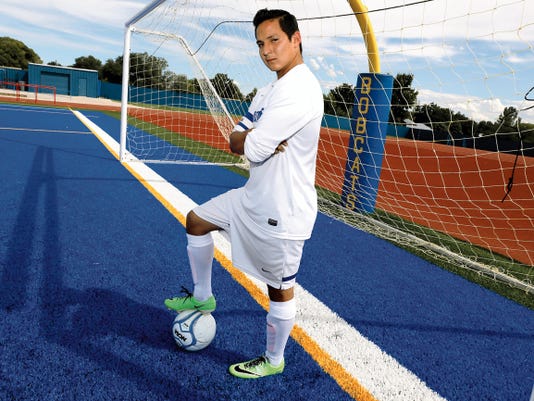 BLOOMFIELD — Racking up individual statistics has never been a problem for Bloomfield's Edgar Fonseca.

Turning the Bobcat soccer team into a winner, however, has been a challenge recently. But the senior captain has his team heading in the right direction in 2015.

Enter first-year coach Scott Reid, the return of players who were injured or academically ineligible and a more mature Fonseca, and you have a Bloomfield team that is off to a 4-1 start this season.

"I lean on him quite a bit to be a leader, which is a great luxury to have as a first-year coach," Reid said. "Sometimes, as a coach, the boys don't always respond to the same old voice, so it's good to have a guy like Edgar on the field to lead the others by example."

A four-year varsity player, Fonseca experienced team success as an underclassman when Bloomfield won 16 games in 2012 and 15 in 2013 before the two-win dud last year. Fonseca said he often felt like he was trying to do everything on his own.

"It seemed like I had no help in some games," he said. "Everybody either put their heads down too quickly or just kind of stopped trying, and I felt like I had to make all the goals happen myself."

With 2014 in the rearview mirror, Fonseca has had the chance to gather himself and start fresh this year. Reid said Fonseca is playing as if a huge weight has been lifted from his shoulders.

"One thing I told Edgar is, 'You don't have to do things by yourself this year,'" Reid said. "The flow of his game is so much different now. Nothing's forced, and the burden is gone."

The talented midfielder already has four goals and three assists in five games.

Speaking about his newfound sense of relief this year, Fonseca said he has also ditched some of his former tendencies on the field.

"My main challenge this year for Edgar — and I told him this — I said 'Edgar, if you can not worry about rocketing a ball 90 miles an hour, and you can just pass the ball to the corner of the net, you're not going to get 13 goals, you're going to get 23 goals,'" Reid said.

Reid, who served as an assistant for the Bobcats until taking over as head coach this year, said Fonseca has embraced that challenge and is showing more touch than in past years. But one part of Fonseca's game that hasn't changed is his knack for scoring incredible goals.

In a 3-1 win over Miyamura Aug. 25, with Fonseca's back to the net and less than three minutes to go, he bicycle kicked a ball out of mid-air for a goal to break the 1-1 tie.

The highlight-reel score would have served as the game-winning goal, but just a few minutes later, Fonseca added a header goal for good measure to seal the win.

"That goal was one of the most amazing goals I've ever seen at any level," Reid said. "I told him after that goal, 'That's why you're one of the best players in the state.'"

Fonseca's family has played a huge role in his development as a soccer player. Fonseca said his dad played soccer in Mexico and taught him everything about the sport.

When he was younger, he said he and his brothers competed against one another to see who could score "the nicest goal." That's where his pretty bicycle kick began to take shape.

"I would always practice those bicycle kicks with my brothers to try to pull off the coolest looking goal," Fonseca said. "Now, it's something I feel like I can use in games."

Fonseca said his goal is to play Division I or Division II soccer when he graduates in the spring. Reid thinks that goal is within reach, due largely to Fonseca's tireless work ethic.

"He's not going to be outdone by anyone on the field, and as he gets older he just seems to get hungrier," he said. "He doesn't back down from anyone, and he stays aggressive against everyone. When there's a 50/50 ball, and it's between you and Edgar Fonseca, you better hope you get there first. Because he's one of those players."