FARMINGTON — It certainly wasn't the way Farmington's 4C-Clubsox thought their season would end. 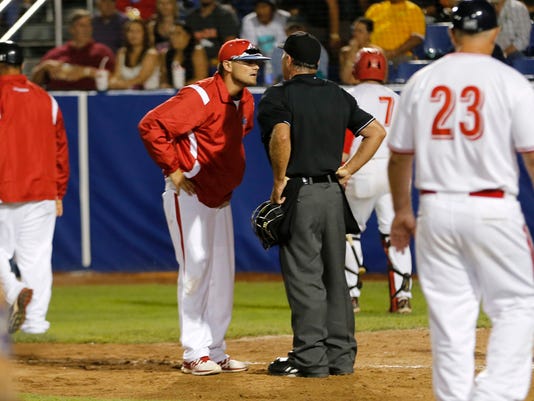 FARMINGTON — It certainly wasn't the way Farmington's 4C-Clubsox thought their season would end.

But ultimately, a lightning storm forced umpires to call Game 8 of the Connie Mack World Series prematurely when the Louisiana Elite Yankees were ahead by five runs.

Louisiana Elite, out of Mandeville, La., took a 5-0 lead into the top of the sixth as lightning and eventually pouring rain pelted Ricketts Park. After a half-hour delay, the game was officially called.

Out of the gate, the teams seemed evenly matched out.

The Clubsox's first eight outs of the game came via ground outs. Meanwhile, Louisiana Elite scuffled against Clubsox starter Joe Standley for the first two innings and began to rely on small ball.

Yankees shortstop Hunter Stanley reached base on an infield bunt single in the bottom of the third. Louisiana Elite coach Cole Catalano opted to sacrifice bunt twice in a row to get Stanley to third. The Yankees scored Stanley later in the inning on a double-steal attempt, when Stanley crossed home plate as the Clubsox were distracted by Dylan Hardy swiping second.

"Sometimes, small ball's going to get you where you need to go," Catalano said. "Runs are at a premium in this tournament, and we found a way to get him across and get some momentum."

But the Clubsox threatened in the next inning by putting runners on second and third base with one out. Shortly after Chris Moore went down on strikes, chaos broke out on the field.

Kyle DeWees watched the ball slide past catcher Evan Pace, apparently thinking it was a ball. But the home plate umpire Dennis Whalen and the scorekeepers had a different count on balls and strikes. After hesitation and ballpark-wide confusion, DeWees was called out.

As the Louisiana Elite players trotted off the field, Logan Klunder, who was on third base, sprinted home. To the Clubsox and the crowd, it appeared Klunder scored the Clubsox's first run, but that's when the home plate umpire made the delayed strikeout call regarding DeWees to end the inning.

"I've been around a lot of baseball, and I've never seen a catcher dive beside the plate to grab a ball that hits the backstop called a strike," Clubsox coach Brett Alexander said. "We weren't prepared for that strike in the dugout. Kyle wasn't prepared for it, and we thought we snuck a run in. But I guess not."

The Yankees added insurance runs in the bottom of the fifth. Standley gave up a single, hit two batters and walked Hardy to score a run. He then gave up a 2-RBI, line-drive double to Travis Swaggerty, and Louisiana Elite increased its lead to 4-0.

Phil Archuleta relieved Stanley after the Swaggerty base knock. Alexander said Stanley pitched well, but a few things led to his fifth-inning downfall.

"The ball was kind of slipping out of Joe's hands, and he hit a couple guys, and it kind of snowballed," Alexander said. "But he's a great pitcher who had a good night, and he'll has many good years in him to come."

Jacob Turcotte failed to cleanly field a ball off Pace's bat at the next at-bat, which allowed Hardy to scamper across home plate and make it 5-0.

With the win, Louisiana Elite (23-7) advances to square off with the Bayside Yankees at 10 a.m. Tuesday at Ricketts Park. The Clubsox closed out their Connie Mack World Series run with a record of 26-8.