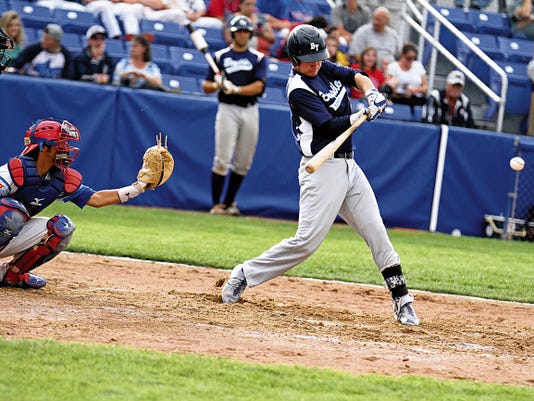 FARMINGTON — D-BAT Elite picked up where the D-BAT program left off at last year's Connie Mack World Series: with a win.

D-BAT — which won last year's series — knocked off the Bayside Yankees 7-5 in Game 2 of the 2015 Connie Mack World Series on Friday evening at Ricketts Park.

D-BAT pitcher Kevin Copps picked up the win, pitching a complete game and saving the D-BAT bullpen for the future.

"Kevin has been our best guy all year," D-BAT head coach Ryan Nelson said of Copps. "He sits at 85 to 87 (mph) and can really sink it, has a great slider and has great tempo on the mound. He's been great, and he's been that all year."

D-BAT, based out of Dallas, wasted no time, scoring one run in the top of the first inning when second baseman Robert Salazar hit a single to score Andrew Bolin and make it 1-0. D-BAT continued to produce at the plate, loading the bases with one out. But Bayside pitcher Robert Donnelly struck out the next two batters to get out of the inning.

After D-BAT (31-9) retired the first two batters in the bottom of the first, the Yankees (32-23-1) extended the inning after Aaron Adams reached on an error and Adam Sasser drew a walk. With two on and two outs, Travis Wacker ripped a double to the wall in left center to score Adams and Sasser and give the New York City-based Yankees a 2-1 lead after one inning.

"I was looking for fastballs, and if it was something different I'd adjust," said Hill, who went 3 for 4 at the plate with three RBIs. "It worked out for me today, and I'm going to try to continue that all week."

D-BAT's offense stayed hot in the top of the fifth with Bohm leading the inning with a solo home run. D-BAT scored two more runs in the inning with RBIs from Braden Williams and Hill.

"All year we've had guys come up with big hits in big situations," Nelson said. "It seems like out here (at the CMWS), a big two-out hit is what separates you. Everyone is so talented that whoever can execute and get those big hits makes the difference."

The D-BAT offense got help in its run production with the Yankees pitching staff walking six batters.

"The key to the game was we walked six guys, and four of them went on to score," Bayside coach Marc Cuseta said. "If you look at our schedule this year, in games that we scored five runs, we probably won 90 percent of them. You can't walk six guys against a quality team like that."

The five-run lead was short-lived, with Bayside scoring three runs in the bottom half of the fifth. After drawing a lead-off walk, Roman Trujillo — a 2015 Onate High graduate and New Mexico State University commit — came around to score on an Aaron Adams RBI. Adam Sasser drove in two more runs with a double to cut the deficit to 7-5 after five innings.

But Copps quieted the Yankees and closed out the game.

"It's been unreal. It's been unlike any tournament I've ever been at before," Hill said. "There were a few thousand people here for that game, and it's just the first round. I think it's going to be real special."

Karl Schneider covers sports for The Daily Times. He can be reached at 505-564-4648 and kschneider@daily-times.com. Follow him @karltschneider on Twitter.