FARMINGTON — Jockey Alfredo Juarez Jr. and heavy favorite Alonso may not have been first away from the gate in... 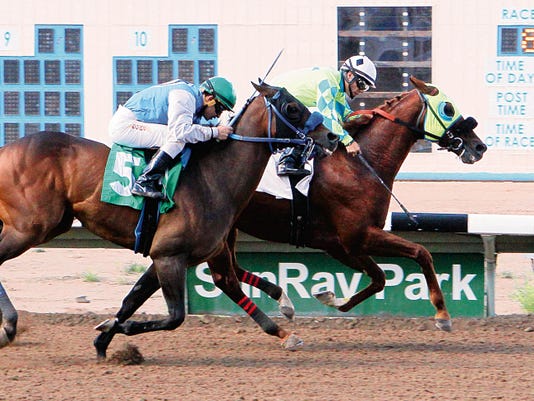 Alsono (inside), ridden by Alfredo Juarez Jr., prevails by a neck over Chasing The Heat and jockey Enrique Gomez in Sunday's 35,000 Marathon Handicap at Sunray Park and Casino.(Photo: Photo Courtesy of Coady Photography)

FARMINGTON — Jockey Alfredo Juarez Jr. and heavy favorite Alonso may not have been first away from the gate in Sunday's $35,000 Marathon Handicap, but they were good enough to be first when it mattered most.

Alsono, ridden perfectly and patiently by Juarez after a slow beginning to the 870-yard test, rallied from well off the pace around the turn, dropped to the inside when the rail opened up and prevailed in a stern test down the lane. He narrowly beat out Chasing The Heat in front of a crowd of over 1,400 spectators at Sunray Park and Casino.

A multiple stakes winner and one of the most versatile horses in the barn, Alonso picked up the pace after racing midpack down the backstretch. He chased Famous Edge of Glory and Tres Primeros through a quick first-quarter mile.

Alsono picked up his ninth win in 20 career starts and he saved ground throughout while Juarez positioned the son of Limehouse close to the rail. Alonso then began to pass the leaders entering the top of the stretch, and held off the late rally of Chasing The Heat to win by a neck.

Owned by Tony Pennington, Alonso is now a perfect 2-for-2 at Sunray Park and Casino. He is unblemished in three starts at this distance, and ran the 870 yards in 44.43 seconds, which was just a shade off the course record.

Chasing The Heat ran too well to lose. He made up ground alongside the winner on the turn, but jockey Enrique Gomez had to race three-wide into the lane, losing some momentum and just missing while well clear of the rest of the field.

"I knew he was a little slow away from the gate," Juarez said after the race. "But I knew (on the turn) he had a lot left and we got lucky when the rail opened up for us like that."

Alsono's connections earned $21,000 for the winning effort, increasing his career bankroll to over $282,000.

"He's such a special horse," Evans said of Alsono. "I can run him at a lot of different distances and he always gives me a top effort."

It was four lengths back to Famous Edge of Glory, who finished third. He was also well ahead of the rest of the field, which included Tres Primeros, Runaway Jeans, Fishin For Dough, Record Heat and Miss Tessmocker.

Live racing resumes at Sunray Park and Casino on Tuesday with a first post time for an all-thoroughbred program set for 3 p.m.

First Valiant Sign was the only horse with a chance to take the All American Triple Crown Bonus of $4 million, but lost that opportunity with the narrow defeat. He would have also needed to win the Grade 1, $3 million All American Futurity on Labor Day to take the bonus.

"He brushed at the start and was in the lead in the second jump," Tres Friends' jockey Ricky Ramirez said. "He really ran a good race."

Tres Friends was timed at 19.744 for the 400 yards, while finishing a diminishing neck ahead of First Valiant Sign, who made a furious charge after his troubled start. It was another neck back to third-place runner My Royal Wagon, owned by Brian Gunder and trained by Brian Muse.