FARMINGTON — Poor pitching plagued the 4C-Clubsox, who walked in three runs in the fourth inning en route to a... 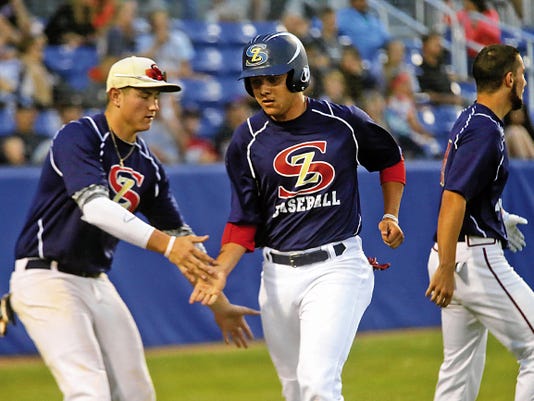 SZ Morrissey's Dalton Watson is congratulated by teammates after scoring a run against the 4C-Clubsox Wednesday during a game at Ricketts Park in Farmington.(Photo: Jon Austria &#8212; The Daily Times)Buy Photo

FARMINGTON — Poor pitching plagued the 4C-Clubsox, who walked in three runs in the fourth inning en route to a 9-1 loss to SZ Morrissey in Round 3 of the Connie Mack City Tournament at Ricketts Park Wednesday.

With knuckleballer Wyatt Weaver getting the start on the mound for the Clubsox, SZ Morrissey's game plan was to be patient in the batter's box and force Weaver to find the strike zone.

"We knew if we faced Wyatt, that would be our plan going in. We wanted to stay patient," SZ Morrissey coach Adam Morrissey said. "We were swinging a little too much in the first inning, but in the second, third and fourth innings, we did a really good job of staying patient at the plate."

When SZ Morrissey got pitches to hit, they put them in play, hitting them where the Clubsox weren't.

Dalton Watson led the way for SZ Morrissey, going 3 for 3 at the plate with three RBIs.

SZ Morrissey scraped together one run in the top of the second when a Clubsox error allowed Dalton Watson to advance home from third.

In the third, SZ Morrissey came up with three more runs, two coming on a two-RBI triple when Watson hit it to the wall in center field.

Then the Clubsox pitching came apart in the fourth.

After Easton Haskill reached on an error, the Clubsox walked Bryce Washburn, beaned Lawrence Mayberry, then walked Matthew Knickerbocker with the bases loaded to make it 5-0.

The Clubsox walked in two more runs and gave up RBI singles to Watson and Austin Ely before finally getting out of the inning with a double play.

"I take complete blame," Clubsox coach Brett Alexander said of the team's pitching woes. "We had it set up just how we wanted, but we didn't throw strikes, and I take blame for that. (Relievers) Phillip (Archuleta) and Cub (Jacob Turcotte) didn't have a chance to get in the bullpen before pitching because they came in from the field. I should have done something different to break it up."

The loss sets the Clubsox up against Naa'taanii in an elimination game at 5:30 p.m. today at Ricketts Park.

SZ Morrissey remains one of two unbeaten teams through three rounds of play and will face the Sting, the other undefeated team, at 8 p.m. today at Ricketts Park.

"Every year, we play the Sting, and it seems like every year they play us tough. They have a good program up there," Morrissey said. "It's like I told the guys in the dugout just now, 'No one has won the host team bid on a Wednesday.' It was a good win tonight, and we'll enjoy it tonight, but the Sting's another challenge, so we've got to be prepared."

With the bases loaded and one out in the bottom of the seventh inning, Taed Heydinger stroked a two-RBI double to push the 14ers past the Demons 5-4 in an elimination game at Ricketts Park Wednesday.

The 14ers jumped out to a 2-0 lead after the first inning and stayed in control through four complete innings.

Down 3-1 in the top of the fifth, the Demons rallied for a pair of runs to tie the game at 3.

Then, in the top of the seventh, Nate Anlgo drew a leadoff walk and later came around to score, putting the Demons up 4-3 heading to the bottom of the seventh.

Kaleb Hansen drew a walk to lead off the inning, then Brody McGhehey singled to put runners on first and second with no outs. After a sacrifice bunt to advance the runners, Zane Phelps drew another walk, loading the bases for Heydinger.

The loss ends the Demons' tournament run, while the 14ers stay alive and will play the Halos at 3 p.m. today at Ricketts Park.

Karl Schneider is the sports editor for The Daily Times. He can be reached at 505-564-4648 and kschneider@daily-times.com. Follow him @karltschneider on Twitter.