FARMINGTON — Diabolical Dame is making a strong case to be a top three-year-old thoroughbred filly bred in the... 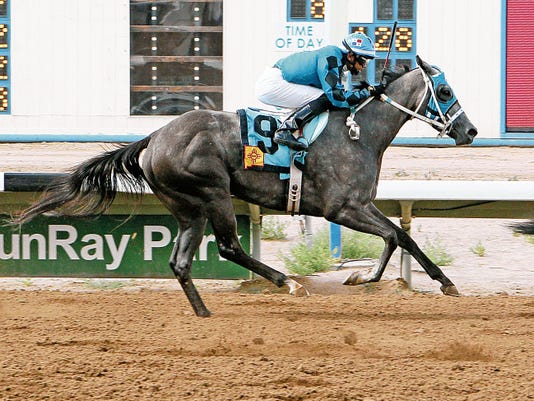 FARMINGTON — Diabolical Dame is making a strong case to be a top three-year-old thoroughbred filly bred in the state of New Mexico. On Saturday, she was on top of her game, putting up a romping score in the $45,000 Russell and Helen Foutz Distaff Handicap at Sunray Park and Casino.

Ridden expertly by Aldo Arboleda for trainer Todd Fincher, Diabolical Dame drew away from her rivals at the top of the stretch to post a two and a half length win over Back Seat Roll. In the process, the daughter of Diabolical has now won three in a row, including two stakes races.

Sent off as the 4-to-5 favorite in the six and one half furlong sprint, Diabolical Dame's biggest challenge may have been the riderless Stormin Creek, who actually crossed the wire in front of the winner. However all hope was lose for Stormin Creek at the start of the race after coming out of the gate awkwardly and dropping rider Alfredo Juarez Jr.

Diabolical Dame raced third in the early stages of the race, chasing the pacesetting Trader's Pride, who was dueling with Funnyoushouldask for the first half mile.

Three wide around the far turn, Arboleda and Diabolical Dame drew up alongside Funnyoushouldask and Luis Rodriguez, putting that one away at the head of the lane.

Stormin Creek kept the eventual winner company briefly down the stretch, but Diabolical Dame was well ahead of Back Seat Roll, who made a late bid to finish second under rider Enrique Gomez.

The winner, owned by Joe Dee Brooks, Scott Bryant and Derrol Hubbard, ran the distance in one minute, 17.63 seconds and won for the sixth time from 10 career starts.

In addition to the Foutz, Diabolical Dame also owns a win earlier this year in the Bank of Albuquerque Handicap last May at the Downs at Albuquerque.

Back Seat Roll, while never a threat to the winner, may have been compromised a bit down the lane racing behind Stormin Creek. Trained by Henry Dominguez, who was looking to win back-to-back stakes this weekend after scoring with Unfettered in Friday's Inaugural Handicap, Back Seat Roll finished nearly four lengths in front of Funnyoushouldask.

Stormin Creek wasn't the only horse in the Foutz that had issues coming out of the gate.

Park Lane Lass went into the gate with rider Nancy Summers aboard. As the gates sprang open, however, Summers was tossed from her mount as she reared up in the gate.

Both Summers and Juarez Jr. came away from their incidents unhurt, as did their respective mounts.

Tylers Dixie Chick was disqualified from fourth to eighth for interference in the stretch.

Racing resumes today at Sunray Park and Casino with a nine-race program that gets underway at 1:30 p.m. The featured event is the $35,000 Animas Stakes, the first stakes race for quarter horses at the current season.

El Damazo, the 5-to-2 morning line favorite in the Animas, is coming off a third-place finish in the Conquistador Stakes on May 31 at the Downs at Albuquerque.

A three-time winner and earner of over $112,000 from seven career starts, El Damazo is trained by Cynthia Gonzalez and is scheduled to be ridden by Alonso Rivera. El Damazo will break from post 8 in the nine-horse race, set for 400 yards.

The Animas will go as the fifth race on the card, with a scheduled post time of 3:06 p.m.