DENVER — Researchers say they found scattered accumulations of heavy metals along a 60-mile stretch of... 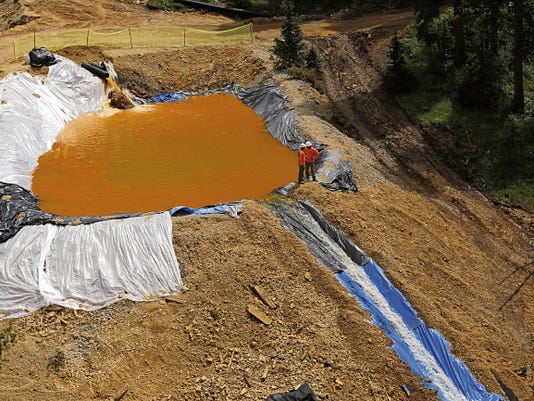 Environmental Restoration LLC employees work on Aug. 10 at a temporary water treatment holding facility at the Gold King Mine north of Silverton, Colo. More than 3 million gallons of wastewater rushed out of the mine on Aug. 5 after a cleanup crew accidentally breached the mine's entrance.(Photo: Daily Times file photo)

DENVER — Researchers say they found scattered accumulations of heavy metals along a 60-mile stretch of riverbank in Colorado and New Mexico a month after the Gold King Mine wastewater spill and say that any potential threat to crops and livestock should be studied further.

The concentrations of those metals were higher than at other sites they tested on the riverbank and on nearby irrigated and nonirrigated land, Weindorf said.

None of the high readings was found in ditches that carry irrigation water to crops, Weindorf said. Irrigation systems along the Animas were closed before the mustard-colored plume of tainted wastewater drifted downstream after the Aug. 5 blowout at the Gold King Mine in southwestern Colorado.

About 3 million gallons of wastewater rushed out of the mine after a cleanup crew supervised by the Environmental Protection Agency inadvertently breached a debris dam at an entrance to the mine.

The water tainted rivers in Colorado, New Mexico and Utah. The EPA has been sharply criticized for causing the blowout and for being slow to notify downstream users, including the Southern Ute Tribe and the Navajo Nation.

The EPA has said its tests of water and sediment show concentrations of metals have returned to pre-spill levels, but it's not clear whether the agency tested the same areas Weindorf and Lombard did.

EPA spokeswoman Laura Allen said the agency will review the researchers' findings. She said the EPA plans its own long-term monitoring project and has asked the affected states and tribes for their input.

Weindorf described his and Lombard's work as a pilot study and said he didn't want to cause undue alarm, but he believes soils need to be tested over the long term. Over time, the metals they found along the riverbank could be washed into the river, get into irrigation ditches and gradually build up in the soils of land used to grow food and to graze livestock.

"There's a risk those metals could work their way into our food chain or the food chain for animals. That's why we want to do this long-term study," he said.

Weindorf and Lombard have asked the Natural Resources Conservation Service, part of the U.S. Department of Agriculture, to fund a three-year study that would closely monitor five or six sites along the river. He estimated it would cost $750,000 to $1 million. No decision has been made.

Lombard, who works at the NMSU Agricultural Science Center in Farmington — where the Animas joins the San Juan River — said researchers also took soil samples from irrigation ditches before the polluted plume passed to compare with future tests.

Weindorf and Russell Begaye, president of the Navajo Nation, questioned why the discolored material wasn't removed by cleanup crews.

"They need to get out there and remove soil that's contaminated," Begaye told a U.S. House committee hearing Thursday.

Asked about that kind of cleanup, the EPA said it doesn't anticipate any human health problems from contacting or accidentally ingesting river water, and that the risk to livestock was low.

The department advised avoiding any contact with discolored sediment and water and washing after any exposure.