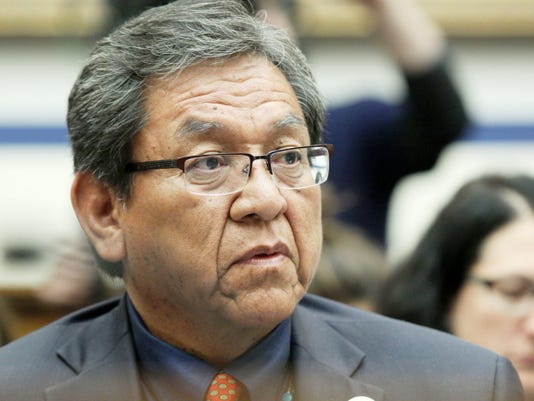 The move by federal agencies aimed to downplay the severity of the spill, hobbling the state's response to the high levels of arsenic, lead and other contaminants involved in the spill, New Mexico Secretary of Environment Ryan Flynn said.

His criticisms, aired before a U.S. House committee investigating the Aug. 5 accident, offered more fodder for congressional Republicans eager to find fault with a federal agency they perceive as having an anti-business agenda.

An EPA cleanup team accidentally triggered the 3 million-gallon spill as it was doing excavation work on the inactive Gold King mine near Silverton, Colorado. The plume turned the Animas River there a sickly mustard yellow color, and the pollution tainted with heavy metals flowed downstream to New Mexico and Utah.

EPA spokeswoman Laura Allen said water-quality test results were made public on the agency's website as soon as they were validated. The EPA has closely coordinated with state officials and American Indians from the Navajo Nation, Southern Ute and Ute Mountain Ute tribes to keep them apprised of the test results, Allen said.

But Flynn said the EPA's warning about the pollution came belatedly, and it was followed by incomplete testing data presented in a way that minimized the presence of contaminants above drinking-water standards. He called it a "PR stunt" by the EPA.

"It was so insulting that I just can't imagine a scientist would be involved in its development," he said of data given to the state.

Allen did not directly address Flynn's allegations or explain why some data was apparently withheld.

The EPA announced Thursday that it was reducing testing for contaminants on rivers affected by the spill, after declaring that the water and sediments had returned to their "pre-existing conditions."

Flynn said he remained concerned about contaminated sediments harming the environment, and a long-term monitoring plan offered by the agency is inadequate. That echoed concerns raised by Navajo President Russell Begaye, who questioned the EPA's role overseeing the response to a spill that it caused.

Thursday's hearing before the House committees on Natural Resources and Oversight and Government Reform was the fourth this month examining the spill. Republican lawmakers have used the events to bash the EPA for its handling of issues ranging from climate change to the protection of streams.

Democrats have sought to put the focus on the mining industry and ongoing pollution from tens of thousands of abandoned mines across the country.

U.S. Rep. William Lacy Clay called the hearing a "farce" that was intended to blame the EPA for the "callous disregard of mining companies."

"We should be ashamed of what we're doing in this committee today," the Missouri Democrat said.

The Colorado spill came from a cluster of century-old mines in the San Juan mountains that together discharge an estimated 330 million gallons of toxic wastewater annually, EPA Administrator Gina McCarthy testified. That's over 100 times more pollution than the Gold King spill.

"We were trying to get a handle on a situation that was growing increasingly dangerous," McCarthy said. "This is not the EPA's ... finest hour. But I am here to tell you that we are taking responsibility."

She added that mining companies contribute "close to zero" money to help clean up such sites, under an 1872 mining law that the administration of President Barack Obama has proposed to change.

House Natural Resources Committee Chairman Rob Bishop said that the EPA should face civil and criminal penalties for not consulting with the U.S. Fish and Wildlife Service before its work at Gold King.

The EPA had warned in 2014 that a blowout from the mine was possible, and Bishop said under the Endangered Species Act, the agency should have considered the potential harm to protected species living downstream in the Animas and San Juan rivers.

The Utah Republican previously has been a strong critic of the Endangered Species Act and backed measures to scale back the law's reach.

"You violated the law. The standard you make everyone else live by, you violated," he told McCarthy.

McCarthy responded that she did not believe the law had been broken, but a review of the accident needs to be completed before a final determination. An Interior Department investigation of the spill is due in late October. The EPA Inspector General's office is conducting a separate review.