Agency: 'We are taking a long-term approach to improving downstream notification'

FARMINGTON — The Environmental Protection Agency released documents earlier this week that outline how the...

Agency: 'We are taking a long-term approach to improving downstream notification' 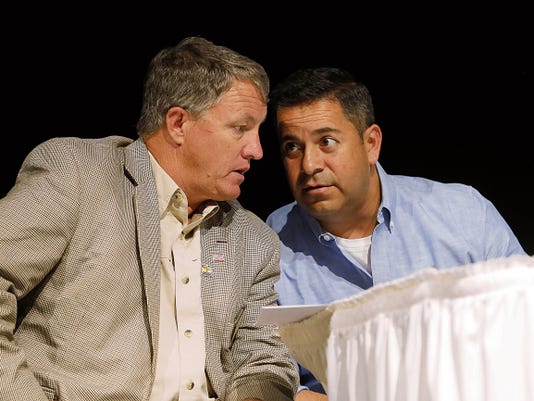 FARMINGTON — The Environmental Protection Agency released documents earlier this week that outline how the agency plans to alert communities downstream in case the Gold King Mine outside Silverton, Colo., experiences another spill.

The plan defines alert levels for a spill or any mining activity that would impact the watershed downstream of the mine, and it outlines when EPA officials would notify nearby communities within the affected watershed.

The Gold King Mine spill in early August — which led to the release of more than 3 million gallons of toxic wastewater — would have fallen into the highest alert level on the plan. Under that level, an EPA on-scene coordinator based in Durango, Colo., would alert an EPA command center "as soon as practical," according to the plan.

The last step would be for the EPA command center to schedule a briefing with the stakeholders "as soon as practical," according to the plan.

She said the plan should also be a part of a larger corrective action plan, and the EPA should work with the New Mexico Department of Homeland Security "directly regarding this."

Since the spill, local, state and federal officials have criticized the EPA for what they describe as a poor job of notifying downstream communities in New Mexico and other states.

"According to an EPA memorandum, the release occurred on Aug. 5 at 10:51 a.m.," U.S. Rep. Ben Ray Lujan, D-N.M., said in a congressional subcommittee meeting on Friday. "However, EPA headquarters, Region 6 and Region 9 were not notified until 11 a.m. the next morning."

EPA officials were not immediately available to respond to the criticism, but spokesman David Gray said in an email earlier on Friday that the agency has set no date for the on-scene coordinator in Durango, Colo., to leave. He said the plan will remain in effect as long as work continues at the Gold King Mine.

"So I think it is fair to say that we are taking a long-term approach to improving downstream notification beyond" the plan, he said.

The Navajo Nation Office of the President and Vice President did not respond to a request for comment.

Gray said the EPA could not release the stakeholder list referenced in the plan because lawyers are reviewing it for privacy act compliance, but he provided the names of the communities included on it. It includes a number of Colorado agencies but also the New Mexico Environment Department, San Juan County and the Navajo Nation, as well as Arizona and Utah agencies.

San Juan County Emergency Manager Don Cooper said the notification plan hinges on the EPA keeping an on-scene coordinator in Durango, Colo. And that person, he said, has to get the word to the county in an emergency.