FARMINGTON — The federal government is paying nearly all the costs to rebuild crumbling taxiways at the Four... 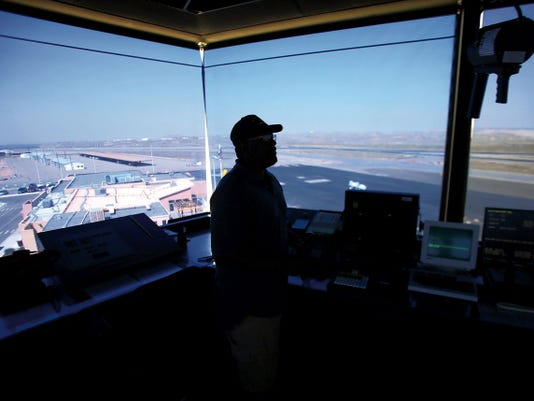 An air traffic controller watches Wednesday as an aircraft prepares for landing at the Four Corners Regional Airport in Farmington.(Photo: jon austria &#8212; the daily times)Buy Photo

FARMINGTON — The federal government is paying nearly all the costs to rebuild crumbling taxiways at the Four Corners Regional Airport.

New Mexico's U.S. senators, Tom Udall and Martin Heinrich, announced on Tuesday that the Federal Aviation Administration is awarding the city a little more than $200,000 to design plans to fix taxiways G, E and F on the east side of the airport.

The FAA will also pay more than $1.6 million to rebuild the taxiways once the plans are designed, Airport Manager Mike Lewis said.

The federal government will fund almost 94 percent of both projects — as it commonly does at airports — and Farmington and the New Mexico Department of Transportation will split the rest, Lewis said.

Udall and Heinrich touted airports as "economic engines" in New Mexico in a news release earlier this week.

"By strengthening our transportation system, we can boost commerce, increase travel and spur job creation," Heinrich said in the release.

The three taxiways are crumbling because the clay soil beneath them is susceptible to freezing and melting, and that expansion and contraction buckles the pavement above the soil, Lewis said on Wednesday while sitting in an SUV at the edge of taxiway G.

"See all that crack-fill right there," he said, pointing to cracked pavement wrinkled with black lines. "That tells you something isn't good."

To fix the taxiways, crews have to rip up the pavement, dig out the clay, fill in new soil and repave the surface.

He expects the city will begin seeking contractors to build the project next summer.

Eight other municipalities and counties in New Mexico received FAA funds for airport projects, totaling more than $3.3 million, according to the news release.