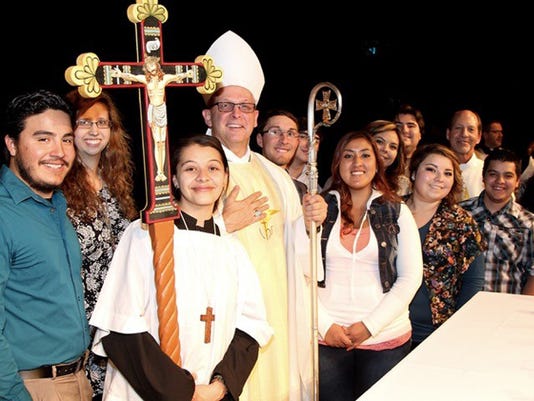 Newman Clubs or Newman Centers receive their name from St. John Henry Newman, who encouraged Catholic students to form communities while attending non-Catholic colleges. His writings prompted students at the University of Pennsylvania to form the first center in 1893, and the centers and clubs soon expanded across the world.

San Juan College was the first in the diocese to have a Newman Club. It shut down in 2007 before students last year brought it back. Now, the club tries to host a different event each month to bring together Catholic students.

Carlos Perez, a member of the club, said he is looking forward to Friday's Mass. He has only met Bishop Wall once, when he received the sacrament of confirmation last spring. Perez called himself a "warrior of Christ," a phrase that holds special meaning to the veteran who has been deployed twice to Iraq between 2003 and 2007.

Bishop Wall will come to the college to celebrate the feast day of St. Newman. Lynn Lane, the Newman Club's staff adviser, explained that feast days generally commemorate the day the saint died.

“It’s looked at as a birthday into the new life of the saint,” she explained.

However, Newman’s feast day, Oct. 9, is different than the day he died, Aug. 11, 1890. Instead, his feast day date commemorates his conversion from Anglicanism to Catholicism.

Hannah Grover covers Aztec and Bloomfield, as well as general news, for The Daily Times. She can be reached at  505-564-4652.

What: Mass with Bishop James Wall

Where: Meeting rooms A and B of San Juan College's School of Energy, 5301 College Blvd., Farmington