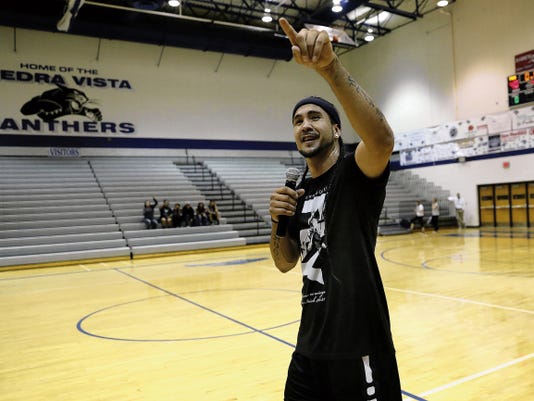 Kenny Dobbs talks Thursday during a community event at the Jerry A. Conner Fieldhouse in Farmington.(Photo: Jon Austria &#8212; The Daily Times)Buy Photo

Stafford was impressed by Dobbs' athleticism and has admired him ever since.

On Thursday night, Stafford and his friends had a chance to meet their idol when Dobbs and a group of local youth pastors challenged local high school coaches and faculty members to a game of basketball at Piedra Vista High School.

The youth pastors brought Dobbs to Farmington for a week to share his testimony and story with students.

Dobbs arrived in Farmington on Sunday and has visited schools throughout the area.

During the Thursday night contest, Dobbs told the audience that God gave him a second chance at life. He struggled with drugs prior to becoming a Christian.

While visiting schools, Dobbs told students there were three keys to his success. During the Thursday night event, he asked young people to remember three things — keep your God close, set goals and put them on paper, and see yourself as a leader.

In addition to the basketball game, Dobbs performed a slam dunk show and invited people onto the court for basketball free throw contests.

Damion Rock-Teran, 14, was one of the winners and received an autographed picture as an award.

"I'm glad he chose me to come out and shoot," Rock-Teran said.

Rock-Teran carried the picture back and showed it to his friends, including his cousin, Kobe Teran, 13.

The cousins have been fans of Dobbs for years. Rock-Teran first heard about the athlete from his friend, Stafford.

"I just wanted to see Kenny Dobbs," Teran said about why he came to the game Thursday night. "I'd never seen him."

"He's everything (I had imagined) and better," Stafford said.